House Speaker Nancy Pelosi, who supports abortion on demand, met with Pope Francis at the Vatican on Wednesday and received Communion during a papal Mass in St. Peter’s Basilica. 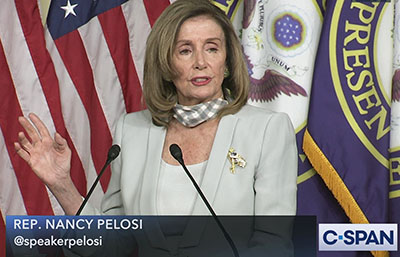 Pelosi was seated in a VIP diplomatic section of the basilica during the Mass that marked the feasts of St. Peter and St. Paul, according to The Associated Press.

“We had the pleasure of attending Mass this morning with His Holiness and many many many leaders of the church,” Pelosi said at the event. “In the spirit of St. Francis, which is the name of His Holiness and my city of San Francisco, I thank you for preaching the Gospel, sometimes using words.”

Cordileone has said Pelosi must either change her stance on abortion or stop speaking publicly about her alleged Catholic faith.

Pelosi called last week’s Supreme Court ruling that overturned Roe v Wade an “outrageous and heart-wrenching” decision that allows Republicans to accomplish their goal of “ripping away women’s right to make their own reproductive health decisions.”

Pope Francis has held on to the Catholic Church’s opposition to abortion but has instructed new archbishops to welcome all into the church, including those who don’t follow its teachings.

Last year, Catholic Bishops spoke about about denying communion to Joe Biden due to his public advocacy for abortion on demand.

In June of 2021, American Roman Catholic bishops announced the creation of a “teaching document” that would instruct priests not to allow pro-abortion politicians to take the sacrament.

“The Catholic Bishops are moving on this resolution that would prevent you and others who’ve supported abortion from receiving communion. Are you concerned about the rift in the Catholic Church and how do you feel personally about that?” A reporter asked Biden at one of his few press conferences.