President Trump, in Veterans Day tribute: ‘Our country will be back … stronger than ever’

In a Veterans Day video message, former President Donald Trump said America’s military veterans are “incredible people” and he promised them that “our country will be back.” 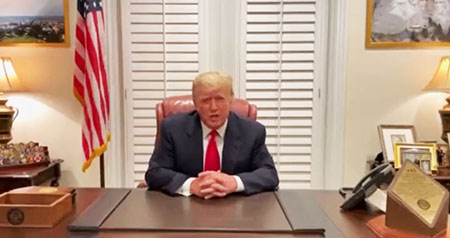 “On this Veterans Day, I’d like to pay tribute to all of those incredible people, and you are indeed incredible people, who serve so well and so strong and so powerfully in the United States armed forces,” Trump said in a video released Thursday morning on the online platform Rumble.

The 45th president, wearing a dark suit and red tie, sat behind a desk with an American flag behind him to his right. A photo of Mount Rushmore hung on the wall to his left.

“We love you, our nation respects you, the world respects you, and we will come back. Our country has gone through a lot. The last period of time has been very, very tough watching what you had to watch, but our country will be back and we’ll be back stronger than ever,” Trump said before adding. “Happy Veterans Day.”

Trump said in an interview this week with Fox News that he’ll “probably” announce a decision about whether he’ll run for president in 2024 after the 2022 midterm elections.

“I am certainly thinking about it and we’ll see. I think a lot of people will be very happy, frankly, with the decision, and probably [I] will announce that after the midterms​,” he said.

Donald Trump, in Veterans Day tribute, President Trump, vows: ‘Our country will be back’, WorldTribune.com

President Trump, in Veterans Day tribute: ‘Our country will be back … stronger than ever’ added by Editor Two on November 11, 2021
View all posts by Editor Two →