The majority of Americans polled in a new survey said they would consider taking active shooter training classes. 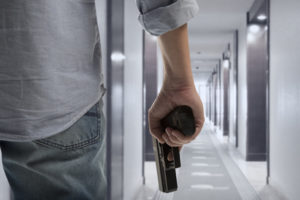 Americans are “proactively seeking out instruction through active shooter classes so they can protect themselves and others if caught in a dire situation,” according to YouGov, which administered the survey.

“There have been reports that gun sales continue to stay hot and that many Americans, especially women and minorities, are applying for concealed carry permits so that they can stay armed all the time,” Washington Examiner columnist Paul Bedard wrote on Feb. 13.

Bedard noted that “Even 60 Minutes on Sunday focused on on the concealed carry rush and the move by some Washington lawmakers to create a national policy.”

The 60 Minutes piece by Steve Kroft “was criticized in some pro-gun circles because they saw it leaning against the effort,” Bedard wrote.

In a CBS story about the story, Kroft opened up about being concerned about letting people carry guns. In an excerpt, he said, “Look, I work at 60 Minutes in New York. And I know that if you armed everybody on the floor and allowed them to carry a concealed weapon it would only be a couple of months before somebody was shot.”