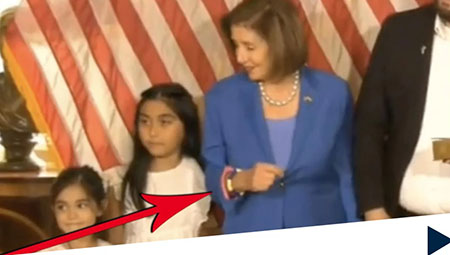 The disgraceful behavior by the 82-year-old Pelosi is on video.

The incident occurred after Pelosi had delivered canned words welcoming Flores to the House: “It’s a great honor to welcome Congresswoman Flores to the Capitol and to the Congress of the United States with great congratulations,” Pelosi said. “And again, grateful for her leadership and her beautiful family who is here today.”

“It’s sad to see ‘news outlets’ that know better misrepresent the Speaker’s effort to ensure Rep. Flores’ daughters wouldn’t be hidden behind her in all of the photos of such an important moment for their family.”

So, delivering an elbow to a little girl is now an appropriate and widely-accepted way to ensure she isn’t “hidden” during a photo-op?

Flores, the first Mexican-born woman to be elected to Congress, ripped into Pelosi after seeing the video.

I am so proud of my strong, beautiful daughter for not allowing this to faze her. She continued to smile and pose for the picture like a Queen.

No child should be pushed to the side for a photo op. PERIOD!! https://t.co/TA50EntDoq

In the footage, which has since gone viral, Pelosi can be seen waving over a pastor. Flores’s daughter gets close to Pelosi, and the ancient Democrat responds with an elbow to move the young girl.

Flores won a special election in Texas’s 34th district after Democrat Rep. Filemon Vela resigned in March. Flores won with 51% of the vote against her Democrat opponent Dan Sanchez, who attained 43.5%. She won in a historically Democratic district after receiving the endorsements of House GOP Chairwoman Elise Stefanik and Texas Republican Gov. Greg Abbott.

“I thank God for the Supreme Court’s historic decision today. It is clear that the Constitution never created a right to abortion, and this ruling rightly returns the authority to regulate abortion back to the people and their elected representatives in the states. All life is precious, and today life won,” she wrote on social media.

Flores was born in Burgos Tamaulipas, Mexico, and came legally to the United States at 6-years-old, according to her bio. She then became a naturalized American citizen.