Ethiopian Prime Minister Dr Abiy Ahmed Ali on June 28 called a unilateral ceasefire in military operations against the Tigré (Tigray) Popular Liberation Front (TPLF) forces in Tigré Region of Ethiopia. This allowed TPLF forces unfettered access to the regional capital, Mekelle, and the prospect that the region would once again attempt to seal itself off hermetically from the rest of Ethiopia.

It is believed that Dr Abiy gave in to immense pressure from the U.S. Government, which had threatened to propose — through the United Nations Security Council — armed intervention in Ethiopia to stop an “humanitarian crisis” in the region. 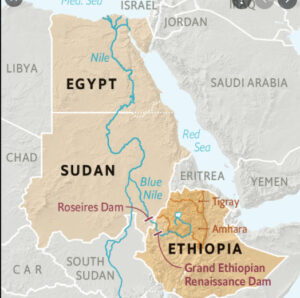 The TPLF felt that the scaling back of the conflict by Dr Abiy was due to the TPLF military success on the ground, rather than the impact of the U.S. and other foreign governments pressuring Dr Abiy to limit military operations in the Tigré region and to cause the Ethiopian prime minister to ensure that neighboring Eritrean forces withdrew from engagement against TPLF forces.

Meanwhile, Ethiopian Government officials appeared by June 28 to have all been withdrawn from Tigré, and the regional capital, Mekelle, is now back in TPLF hands.

What is significant is that there has been no independent verification of the claims of Ethiopian and Eritrean government atrocities against the Tigrean population.

The TPLF has, with some of the estimated $30-billion stolen from Ethiopian funds (and much of that coming from U.S. direct and covert aid during the Barack Obama-Joe Biden Administration), engaged in a major, professional information warfare campaign against the Abiy Government which replaced the Marxist TPLF Government.

This has been assisted by the reality that the TPLF retained great friendships in Washington, D.C., as a result of the deal which the former TPLF Meles Zenawi Government did with Washington to train and equip the TPLF’s private, 30,000-man army in exchange for U.S. use of Ethiopian air basing, particularly at Arba Minch, in Southern Ethiopia.

It should be remembered that the Croatian information warfare campaign in the early 1990s, against Yugoslavia and specifically against Serbia, was mounted with a budget of some $2 billion and was highly successful in strategically containing Serbia at that time.

Senior TPLF officials — many of whom were given U.S. passports by the Obama Administration — boast often of their friendship with senior U.S. officials, but particularly with Susan Rice, the former National Security Advisor to the Obama-Biden White House (July 1, 2013 to Jan. 20, 2017). During her tenure as National Security Advisor, Rice’s deputy was Antony Blinken, now the U.S. Secretary of State in the Joe Biden Administration. But Rice, who is currently Director of the Domestic Policy Council which reports to Biden, had a long history of engagement with the TPLF, particularly dating from her years as Assistant Secretary of State for African Affairs during the Clinton Administration, and as Ambassador to the United Nations from 2009 to 2013.

Significantly, the current U.S. Ambassador to the UN is former Assistant Secretary of State for Africa under the Obama-Biden Administration, Linda Thomas-Greenfield, who had, in that earlier post, lectured African leaders that the U.S. would strictly implement its R2P (“Right to Protect”) interventionist policy to force African governments to comply with her Government’s values.

It was known that, during her tenure as Assistant Secretary of State for African Affairs, President Barack Obama visited Ethiopia in mid-July 2015, and defied advice from Africa exports to tell Ethiopian and other African politicians to accept U.S. views on same-sex marriage, a move which was seen as an affront to most conventional African norms.

Rejection of Obama’s demand was not well received by the White House. By that stage, the founding leader of the Marxist TPLF, Meles Zenawi, was already dead, and the incumbent Prime Minister, Hailemariam Desalegn, who had greeted Obama on his arrival, was already moving the Ethiopian Government away from the grip of the Obama Administration’s ally, the TPLF.

Now, the same team of Obama-Clinton officials are back in power in Washington.

Several realities, as well, point to the fact that the U.S. was now preparing to move forward with plans to support Egypt’s goal in the region, to break up Ethiopia in order to enable Cairo to claim victory in the fight for the flow of Blue Nile waters. However, such a victory would, for Egypt, be pyrrhic, because it will not yield more water from the river to flow down to Egyptian use. So, within a short time, Egypt will recognize that its water problems have not been solved by the destruction of Ethiopia. Nonetheless, it is U.S. (and British) policy to support Cairo, and this was what Cairo sought. The price, however, may well be instability in the lower Red Sea.

Continuation of the present trend by Washington and Cairo now seems set to further polarize the region. …

Meanwhile, in Ethiopia, the TPLF’s moves toward a revived independence campaign would likely have two outcomes, even if that drive is successful.

The first would be to highlight that it was the TPLF conducting the campaign, literally along genocidal lines, against Amhara people (a campaign supported physically and politically by the radical Oromo Liberation Front).

The second would be to create a landlocked state of Tigré, in a condition of constant war with its two major neighbors, Eritrea and Ethiopia, and needing a lifeline land bridge to the sea via Sudan, if, indeed, the lands between the traditional Tigrean area and Sudan can be controlled by the TPLF.

At the end of the day, the U.S. policy, ostensibly to support greater Egyptian ambitions, will not yield more water from the Blue Nile to flow down to Egypt, and Egypt’s strategic water problem will remain unsolved, largely because its population has outgrown available water supplies.

In the meantime, will the Government in Addis Ababa awaken to the reality that its chosen ally, the United States (for which it abandoned the Meles Government’s support for the People’s Republic of China), has, in fact, abandoned it. And would Dr. Abiy, with that realization, resume attacks on the TPLF, regardless of U.S. pressure?

At that point, it seems likely that the U.S. would do what Blinken has already threatened to do: to seek United Nations Security Council approval for an international military intervention into Ethiopia on “peacekeeping” grounds, much as the same U.S. team attempted to do (eventually getting some NATO support) in Yugoslavia during the 1990s?