Is President Obama planning to launch military strikes against Iran in order to ensure re-election? Is there an October surprise being hatched by the White House? All the signals are: yes.

Recently, Mr. Obama told an audience at the American Israel Public Affairs Committee’s (AIPAC) annual policy conference in Washington, D.C. that a nuclear-armed Iran is “unacceptable.” He said that all options—including military force — are “on the table.” And he warned Teheran’s mullahs not to “call my bluff.” In short, the clouds of war are looming on the horizon.

Yet, at the same time, Mr. Obama is strongly pressuring Israel not to attack Iran’s nuclear facilities. The administration argues that diplomacy, sanctions and covert operations are starting to take their toll on the Islamic Republic. Israeli Prime Minister Benjamin Netanyahu has warned Mr. Obama that Jerusalem cannot wait much longer; Iran is about to enter the “zone of immunity” where it will acquire the capacity to build a nuclear weapons program — crossing the threshold whereby the ayatollahs cannot be stopped from getting the bomb. 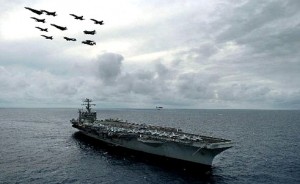 Mr. Obama has assured Mr. Netanyahu not to worry; America will destroy Iran’s nuclear program if necessary. The president vowed at AIPAC that “I have Israel’s back.” He doesn’t. Mr. Obama is playing a cynical game, using the existential fate of the Jewish state as a political trump card to guarantee his re-election in November.

He is the most anti-Israel president in U.S. history. Mr. Obama doggedly opposed the sanctions imposed on Iran — especially, on its central bank. The only reason he begrudgingly signed on was because they were embedded as part of the defense bill. Yet, he now claims credit for their impact. He has repeatedly called for diplomatic engagement with Iranian President Mahmoud Ahmadinejad. In 2009, when millions of pro-democracy protesters poured onto the streets of Tehran and other Iranian cities to protest the rigged elections, Mr. Obama did the unthinkable: He remained silent. He refused to lift a finger or say a word of encouragement to help the brave democrats seeking to overthrow the clerical fascist regime.

Mr. Ahmadinejad is the Hitler of our time. He has repeatedly called for the destruction of Israel, pledging to wipe the Jewish state off the map. The Iranian strongman is a radical Shi’ite revolutionary, who hopes to erect a world Muslim empire on the ashes of the Jews. In short, he is not just the mortal enemy of Israel — and the West — but a genocidal madman. Mr. Obama’s dithering and feckless diplomacy has given the mullahs the one thing they desperately crave: time. They are running out the clock in order to achieve an Islamic bomb. Instead of stopping them, Mr. Obama has only emboldened their nuclear ambitions.

Moreover, the administration has called for Israel to enter peace talks with the Palestinians based on a return to the pre-1967 borders. This would effectively force Jerusalem to accept territorial boundaries that would leave it defenseless against any future Palestinian or Arab invasion. Mr. Obama also withdrew support for Egypt’s pro-American dictator, Hosni Mubarak. The result is that the Muslim Brotherhood has come to power. Mr. Mubarak was many things — venal, corrupt and brutal. But he kept the peace with Israel and helped to advance America’s national interests in the region, especially, in fighting Islamic terrorists. This has now changed. The Muslim Brotherhood aims to forge a Sunni theocracy, transforming Egypt into an anti-Semitic, anti-Western hotbed. Hence, under Mr. Obama’s leadership, the Jewish people find themselves encircled by dangerous Islamists.

Providing Mr. Obama with control over Israel’s future is like trusting Dracula with a blood bank. It is an act of folly. Mr. Obama refuses to give Israel the green light to launch military strikes on Iran. Israeli intelligence officials admit that, privately, the White House has warned Mr. Netanyahu that in the event of an attack Israel — and not Iran — will be blamed by the administration. In short, Mr. Obama is trying to tie Mr. Netanyahu’s hands, coercing him to wait for Washington to take decisive action.

The record, however, is clear: sanctions have not — and will not — work. Russia and China continue to prop up Teheran. Moreover, the mullahs are not driven by economic considerations; a messianic theocracy is not concerned about growth rates or improving living standards. It cares about cementing its grip on power. A bomb will ensure the survival of the Islamic Republic. It will be untouchable. This is why a regional showdown is inevitable.

Mr. Obama is blatantly attempting to maximize his political capital. He is hoping to keep the charade of diplomacy and sanctions going until the summer or early fall. And then, when he believes Iran is on the cusp of going nuclear, Mr. Obama will order an American — not Israeli — air strike on Teheran’s key facilities. The result will be a temporary boost in his popular approval, as Americans rally around their commander-in-chief. It will make Mr. Obama look decisive, strong and presidential. It will propel him to victory, riding a wave of patriotic emotion.

With gas prices surging, unemployment remaining high, Obamacare deeply unpopular, soaring deficits and a debt crisis looming, Mr. Obama cannot win in November. His record is abysmal. He has only one option: bomb Iran. The problem is that it may be too late. Mr. Ahmadinejad’s behavior is not being guided by our election schedule, but religious fanaticism. Israel should ignore Mr. Obama’s Machiavellian promises. He is interested only in power. The Jews are confronting something much more important — survival.

An ecstatic CCP drops the deference to its most formidable adversary: 'Good riddance'
Read more

Sec. of State Pompeo goes out with a bang
Read more