President Barack Obama’s directive allowing transgender students to use the bathrooms and locker rooms of the gender they identify with has been blocked by a federal judge in Texas.

Judge Reed O’Connor on Aug. 21 ordered a preliminary injunction ruling the Obama administration did not follow federal law when it issued its guidelines on transgender students in May, and that Title IX, the law that bans gender discrimination in federally funded education programs, is “not ambiguous” in its definition of sex as determined at birth. 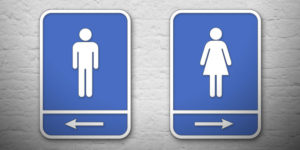 O’Connor’s ruling applies to schools across the nation.

In May, Obama’s Justice Department sued North Carolina over its law that requires people to use public bathrooms that match the sex on their birth certificate. A few days later, the Obama administration issued a set of guidelines to public schools across the nation, stipulating that they must allow students to access sex-segregated facilities consistent with their gender identity.

O’Connor’s ruling is a victory for the coalition of 13 states that challenged Obama’s directive, arguing that allowing students to use bathrooms corresponding to their gender identity violated common sense and threatened student safety. In their complaint, attorneys for the states argued that federal officials’ inclusion of “gender identity” amounted to overreach, going beyond the original intent of Title IX of the Education Amendments of 1972 to turn schools and workplaces into “laboratories for a massive social experiment.”

“This case presents the difficult issue of balancing the protection of students’ rights and that of personal privacy when using school bathrooms, locker rooms, showers and other intimate facilities, while ensuring that no student is unnecessarily marginalized while attending school,” O’Connor wrote in his 38-page ruling. “The resolution of this difficult policy issue is not, however, the subject of this order.”

O’Connor the Obama administration failed to comply with the Administrative Procedure Act in bypassing its notice and comment process and issuing directives that “contradict the existing legislation and regulative text.”

Obama had argued that the word “sex” in anti-discrimination laws encompassed gender identity.

O’Connor countered that Title IX “is not ambiguous” about its definition of sex as “the biological and anatomical differences between male and female students as determined at their birth.”

Without an injunction of the federal guidelines, O’Connor argued, local authorities would be put in “the position of either maintaining their current policies in the face of the federal government’s view that they are violating the law, or changing them to comply with the guidelines and cede their authority over this issue.”

“We are pleased that the court ruled against the Obama administration’s latest illegal federal overreach,” Texas Attorney General Ken Paxton said in a statement on Aug. 22.

Alabama Attorney General Luther Strange called the ruling “a victory for parents and children all across Alabama.” After joining the lawsuit to prevent Alabama schools from being “forced to surrender their restroom access policies to social experimenters in Washington,” Strange said, the state would keep in place its current restroom and locker room policies.