But Big Media and Big Tech “fact checkers” are rushing to assure the world that athletes collapse, and many die, all the time and that the sudden increase in such occurrences has nothing to do with the Covid vaccines. But the huge uptick in healthy athletes collapsing during play did not start until shots started going in arms, many independent media outlets and citizen journalists are pointing out. 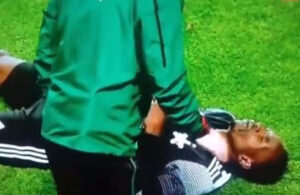 Video shows Traore clutching his chest and then collapsing on the field in Sherrif Tiraspol’s Champions League match against Real Madrid. Sherrif Tiraspol is a Moldovan football club based in Tiraspol.

There goes another one 👀 pic.twitter.com/y5LlIvNdoy

Cabrera collapsed following his game on Wednesday during tournament play at the Ynares Sports Arena in Pasig City.

The Tribune from Philippines reported he had a cardiac arrest, lost consciousness inside the locker room and was immediately rushed to nearby Medical City.

The Philippines is ranked 22 out of 205 countries in Covid vaccination rate.

Mel Sabek has compiled a massive list of athletes around the globe collapsing while in action:

If this is happening to this many well known people,
imagine how many are actually out there!