No worries: Soft words and lots of them

Benjamin Netanyahu and Barack Obama are men trapped in pickles. As the prime minister, Bibi’s first duty is to assure the survival of Israel. Against the prospect of another Holocaust, nothing else matters.

Barack Obama’s pickle is a whopper made of his own bungling, and his stiffing the Israelis is part of that bungling. Push is just about ready to confront shove in the Middle East, and particularly in Iran, which has sworn to destroy the Jewish state, and Mr. Obama apparently can’t spare a few minutes to talk to Mr. Netanyahu about it, even after the prime minister flew to America for the conversation. He shouldn’t be surprised that evil men in Arabia watch, and take note of American “resolve.”

His dilemma over what to do about the assault on American diplomatic outposts in Egypt and Libya is related to Mr. Netanyahu’s pickle, though the president might not understand that. He’s blinded by his infinite patience with the endless barbarism that certain followers of Islam continue to inflict on the rest of the world.

A high Israeli government official says Mr. Netanyahu asked to see the president during a 54-hour visit to the United States, where he will attend a session of the United Nations to listen to abuse, insult and vilification from delegates from assorted tribes with flags who can’t wait to watch somebody else do something they can’t.

The White House response to Mr. Netanyahu’s request, or lack of one, was described by Ha’aretz, the Jerusalem daily that is the favorite of the Israeli left, as marking “a new low in relations between Netanyahu and Obama, underscored by the fact that this is the first time Netanyahu will visit the United States as prime minister without meeting with the president.”

Mr. Netanyahu must tread lightly dealing with this White House. Ehud Barak, the defense minister, takes careful note of this reality, saying “we must not forget that the United States is Israel’s most important source of support in terms of security.” When Mr. Obama’s White House burps and spits, he expects the Israelis to swim. Hence the dilemma: something must be done soon about Iran, or else accommodate Teheran as an irresponsible new member of the nuclear club. Mr. Obama has made it clear that he is not much interested in Israel’s security problems, though he’s willing from time to time, when under duress, to display rhetorical devotion to a U.S.-Israel special relationship. He acts as if he doesn’t believe a word of it.

Mr. Netanyahu must decide whether to deal with Iran’s nuclear program now, before Nov. 6, while President Obama would be under irresistible political pressure to go to Israel’s aid, or delay a strike on Iran’s nuclear weapon works, gambling that Mitt Romney, an authentic friend, will be elected president. If he decides to wait and Mr. Obama is elected to a second term, Israel must do without a trusted friend in Washington. Some pickle, and it’s not even kosher.

Mr. Obama promised Vladimir Putin that if he could get a little space between now and November, he will have “more flexibility” in U.S.-Russian relations after his re-election. He didn’t tell us exactly what that means, though his policy has been to “re-set” relations between the two countries. Once elected, Mr. Obama would “re-set” relations with Israel, too.

We got a glimpse this week of the kind of re-setting we should expect in a second Obama term. “The world tells Israel to wait, ‘there’s still time,’ ” Mr. Netanyahu said. “And I say, wait for what? Wait until when? Those in the international community who refuse to put red lines before Iran don’t have a moral right to place a red light before Israel. If Iran knows there is no red line, if Iran knows there is no deadline, what will it do? Exactly what it’s doing.” 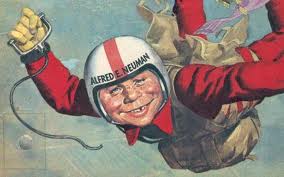 As if on cue, a spokeswoman for the U.S. State Department stepped up with the usual girly-girl stuff: “We don’t think it’s particularly useful to have these conversations in public. It doesn’t help the process and it doesn’t help the integrity of the diplomacy.” A similar girly-girly message of sympathy for the mob led to horror, tragedy and humiliation in Libya.

Diplomacy is nice, and keeps the wet, the wilted and the wimpy of Foggy Bottom off the street. Sometimes diplomacy works, but never when it’s backed by appeasement, apology and high-minded argle-bargle. We’re getting a demonstration in Egypt, Yemen and Libya of what happens when a president speaks softly and carries an apology and a wet noodle. He eventually sounds like Alfred E. Neuman, the famous world leader from Mad comics: “What? Me worry?”