‘No smoking gun’ ties Trump to Capitol breach on Jan. 6

There is no “smoking gun” to indicate that President Donald Trump in any way orchestrated what occurred at the U.S. Capitol on Jan. 6, 2021, according to a former top adviser to the House Jan. 6 Committee. 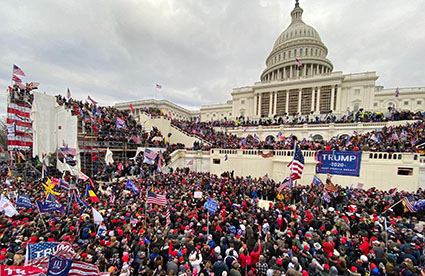 There was no direct evidence that the breach of the Capitol building was a premeditated attack, Denver Riggleman, who until recently was a senior adviser to the committee, told CNN’s “State of the Union”.

“That probably [was] going to be very difficult to even find based on the limited authorities of Congress as far as getting data and things like that,” said Riggleman, a one-term Republican congressman from Virginia who lost to a more conservative challenger in 2020.

Riggleman’s comments come as the committee is set to hold a hearing Thursday. The committee consists of seven Democrats and two RINO’s (Rep. Adam Kinzinger and Rep. Liz Cheney).

It is a certainty, critics say, that the scheduling of the hearing during prime-time hours was concocted in order to give corporate media the chance to again bombard their, in most cases scant, audiences with the “insurrection” narrative.

Even Voice of America (VOA), the taxpayer-funded international radio broadcaster of the United States, has jumped on that bandwagon, running a “news” report by The Associated Press on June 2 which states in the opening paragraph: “The House committee investigating the Jan. 6 insurrection at the Capitol will go public with its findings in a prime-time hearing next week, the start of what lawmakers hope will be a high-profile airing of the causes and consequences of the domestic attack on the U.S. government.”

By comparison, the select committee created in 2014 to investigate the Benghazi terrorist attack spent about $7.8 million over two and a half years.

Meanwhile, the documentary “The Truth About January 6th” premiered on June 6 at The Gateway Pundit.

The documentary was co-produced and narrated by Jan. 6 detainee Jake Lang from solitary confinement.