Recent reports say that President Donald Trump plans to issue an executive order that would end birthright citizenship to the children of unauthorized immigrants and other non-citizens born on U.S. soil.

What is birthright citizenship? 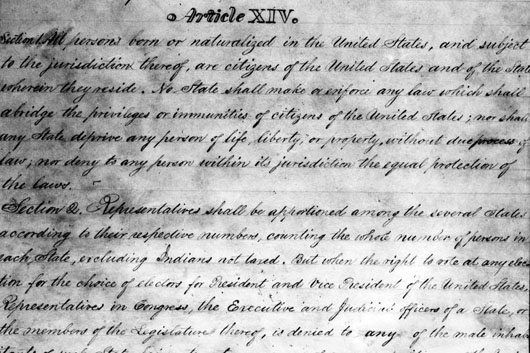 It can be traced to a clause in the 14th Amendment which was passed just after the Civil War. The amendment’s citizenship clause states, “All persons born or naturalized in the United States, and subject to the jurisdiction thereof, are citizens of the United States.”

The citizenship clause has been widely taken to apply to anyone born within U.S. territorial jurisdiction regardless of the immigration status of their parents, with the notable exception of foreign diplomats.

“In its 1898 ruling in the Wong Kim Ark case, the Supreme Court held that the children of non-citizens, when born on U.S. territory, are U.S. citizens by birth. However, the parents in question in the Wong Kim Ark case were legal immigrants, meaning the court did not directly address the status of children born to parents in the U.S. illegally,” Will Racke, immigration and foreign policy reporter, wrote for The Daily Caller on Oct. 30.

That unanswered question gives Trump room to argue the citizenship clause has been too widely interpreted, according to Johns Hopkins University professor Martha Jones, an expert on birthright citizenship.

Jones tweeted: “A narrowly tailored EO [executive order] that rested on the view that the children of unauthorized immigrants are not subject to the jurisdiction of the U.S. (in citizenship terms) and thus not citizens by virtue of Birthright is an argument that can be made.”

If he does issue an executive order on the issue, Trump could be aiming “to force the Supreme Court to update its interpretation of the citizenship clause by explicitly ruling on the question of whether the clause applies to children born to people who are in the U.S. without authorization,” Racke wrote.

Only 30 out of the world’s 194 nations automatically grant citizenship to children born to illegal immigrant parents, according to the Center for Immigration Studies (CIS).

No European country has birthright citizenship.

Countries that have ended birthright citizenship in recent decades include the UK in 1983, Australia in 1986, India in 1987 and Ireland in 2004.

Reid said: “If making it easy to be an illegal immigrant isn’t enough, how about offering a reward for being an illegal immigrant? No sane country would do that, right? Guess again. If you break our laws by entering our country without permission to give birth to a child, we reward that child with U.S. citizenship and guarantee a full access to all public and social services this society provides, and that’s a lot of services. Is it any wonder that two-thirds of the babies born at taxpayer expense in county-run hospitals in Los Angeles are born to illegal alien mothers?”

Reid added, “It is clear that there is a growing public dissatisfaction with our nation’s immigration policies. The American people are demanding reforms that will restore order to an immigration system they perceive to be out of control.”

“These are not racist people who are raising this issue,” said Reid of Americans critical of existing immigration and border security policies.