No more ‘hello boys and girls’ at Disney parks

Jack Wagner, known as “the voice of Disney,” estimated that he uttered the phrase “Ladies and gentlemen, boys and girls” over 8 million times during his 20-plus years as park announcer for Disneyland, Disney World and Tokyo Disneyland.

He won’t be saying it again. 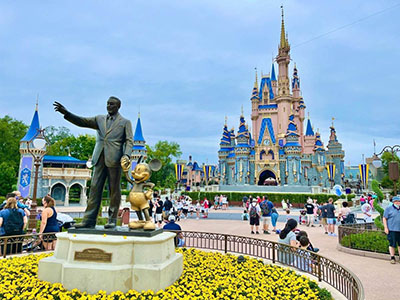 “Ladies and gentleman, boys and girls” is not inclusive enough for the woke mob which bullies into submission any company or individual not fully on board the “equity, diversity and inclusion” plantation.

As Disney was ensuring that Mickey Mouse would no longer address guests with a “hello boys and girls” greeting, a Disney executive vowed that so-called “underrepresented groups” would account for at least 50 percent of Disney’s regular characters by the end of the year.

Karey Burke, president of Disney’s General Entertainment Content, said in a company-wide Zoom call Monday: “I’m here as a mother of two queer children, actually. One transgender child and one pansexual child, and also as a leader.”

Burke said she supports featuring “many, many” characters who are LGBTQIA, which stands for lesbian, gay, bisexual, transgender, queer (or questioning), intersex, and asexual (or allies).

The call was part of Disney’s “Reimagine Tomorrow” campaign, according to the video posted on Twitter Tuesday. Its website promises that 50 percent of regular and recurring characters across the Disney universe will come from “underrepresented groups.”

Burke said she had been dismayed to learn from a colleague that the company only had a “handful” of queer lead characters in its content.

“And I went, ‘What? That can’t be true,’” Burke said. “And I realized it actually is true. We have many, many, many LGBTQIA characters in our stories and yet we don’t have enough leads and narratives in which gay characters just get to be characters and not have to be about gay stories.”

During the same Zoom call, another Disney employee noted how the company has eliminated the use of gendered pronouns throughout its theme parks as part of its inclusivity efforts.

“We no longer say ladies and gentlemen, boys and girls. We say dreamers of all ages.”

Florida Gov. Ron DeSantis on Monday signed legislation that bans Florida teachers from discussing like sexual orientation or gender identity with students unless they’re in the fourth grade or higher.

Disney has denounced the new law and vowed to fight to repeal it.

“Our goal as a company is for this law to be repealed by the legislature or struck down in the courts, and we remain committed to supporting the national and state organizations working to achieve that,” Disney said in a statement Monday.

SCOOP: I’ve obtained video from inside Disney’s all-hands meeting about the Florida parental rights bill, in which executive producer Latoya Raveneau says her team has implemented a “not-at-all-secret gay agenda” and is regularly “adding queerness” to children’s programming. pic.twitter.com/eJnZMpKIXT