If MacArthur had prevailed over Truman: ‘No North Korea today, no nuclear threat … ‘

WASHINGTON — If there was ever a moment when America needed a book about Gen. Douglas MacArthur, “this is definitely the time,”Hudson Institute Fellow Arthur Herman said yesterday.

The author of “Douglas MacArthur: American Warrior” was at pains to explain why the towering American military legend continues to be so controversial despite “one hell of a record”.

Upon being fired by President Harry Truman on April 10, 1951, after leading the campaign that turned the tide against communist North Korean and Chinese forces, MacArthur came home to a hero’s welcome and widespread public anger at the president’s action.

His address to a joint session of Congress ended with the famous words: “Old soldiers never die; they just fade away.”

But MacArthur, who died in 1964, has not faded away. He remains a polarizing and controversial figure, Herman told a book reception at the Hudson Institute offices here.

The dispute with Truman over MacArthur’s position that the United States must defeat both the North Korean and Chinese forces was marked by another memorable quote that serves as his legacy in the subsequent and never-ending disputes between Foggy Bottom and the Pentagon:

“In war there is no substitute for victory.”

It is a lesson, Herman said, “which American policymakers have ignored time and time again.”

While government and political science seminars at university campuses still debate whether MacArthur’s public assertions on the importance of winning the Korean War at that opportune point in the conflict amounted to insubordination, Herman touched on the implications.

Although praised by famed American generals George Marshall, Dwight Eisenhower and George Patton (“Douglas MacArthur is the bravest man I have ever met.”), MacArthur’s reputation today is “ambiguous and blemished,” he said. 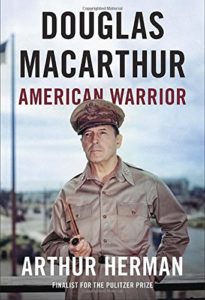 “One reason was personality,” Herman said.

“Throughout his life, MacArthur “never gave a damn what people thought” and “he always knew he was right.”

After lecturing Roosevelt during a Pacific strategy session in the midst of World War II, FDR told aides: “No one has ever spoken to me like that in my life.” He took two sleeping pills and went to bed, Herman said.

What also hurt his reputation was “being conservative. Especially with two liberal presidents Roosevelt and Truman and their entourages.” The same was true of the press, Herman said.