It was only a matter of time before the radical progressive Left got here. Criticizing communist China is now a form of racial prejudice. 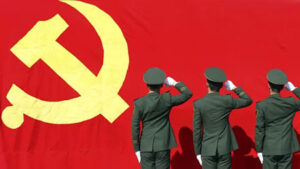 Also to no one’s surprise, a “journalist” for big-box media outlet NBC News is playing a leading role in advancing this warped yet extremely dangerous narrative.

The lunacy started with a political ad criticizing the Asian Red superpower and the detrimental effects its burgeoning global economic power have on blue-collar American workers released by a Democrat House member running for a U.S. Senate seat in Ohio.

China is out-manufacturing us left and right and it’s time we fight back. We’ve got to go all in and it starts by investing in Ohio workers.

We won’t back down from this fight. Never bet against Ohio. pic.twitter.com/TVa2qPiQOy

“It is us versus China,” Ryan says in the one-minute montage of his speeches, many at union halls and to audiences wearing blue-collar uniforms. “And instead of taking them on, Washington is wasting our time on stupid fights.”

NBC News’ “NBC Asian America” reporter Kimmy Yam attracted particular notice with her April 1 piece on the controversy, which has been widely derided as an apologia for the CCP. Here are her first three paragraphs:

Ryan, who is running for Senate, released the spot Tuesday. In it, he claims that “Communist China” is to blame for the loss of American jobs.

“China’s winning. Workers are losing,” Ryan says in the ad. “It’s us vs. them. Capitalism vs. communism. I’m not backing down. Are you?”

Yam has actually taken offense to this before. In 2020 she tweeted:

Yam unintentionally captures how deranged the racial left has become deep inside our own borders today:

Brad Jenkins, president of the AAPI Victory Fund, which in a statement described the spot as “rife with sinophobic rhetoric,” said it’s critical that politicians be held accountable, particularly at a time when the community is weathering anxiety and fears around their safety.

“It’s clear that Tim doesn’t care. He hasn’t centered any kind of awareness for what’s happening and what has taken place over the course of the past two years,” Jenkins said. “Creating a villainous country and claiming that that’s the reason why Ohio has lost manufacturing jobs — not only is that bad policy, it’s racist.”

How can this possibly be seen as anything but carrying water for a brutally oppressive foreign government?

Jenkins said Ryan’s rhetoric — which shifts blame to China, scapegoats Asians and creates a foreign “boogeyman” instead of proposing solutions — is similar to that of former President Donald Trump.

“That boogeyman has led to a historic surge in violence and discrimination against the Asian American community,” Jenkins said. “So Tim Ryan has messed up on every account.”

Yam, who is Chinese-American and has discussed her adult efforts at “repatriating” her Chinese identity, has spouted communist Chinese messaging before. In Feb. 2020 the Chinese were outraged over a Wall Street Journal op-ed that called China the “Sick Man of Asia” due to the precarious standing of its financial markets as the coronavirus hit.

The CCP does not get to dictate our headlines and should spend more time treating the virus instead of covering it up https://t.co/ekiIXO9v46

The article, written by Bard College professor Walter Russell Mead, was published under the headline “China Is the Real Sick Man of Asia” in the outlet’s editorial page. The derogatory phrase “sick man of Asia” has been historically used to perpetuate the stereotype that Chinese people were disease-ridden and unclean.

AAPI Victory Fund, the Asian-American advocacy group denouncing Ryan, has been heavily financed by progressive globalist billionaire George Soros through his Soros Fund Management organization ($50,000 in 2018) and via the Soros-backed Tides Advocacy group ($75,000 in 2022).

Beyond how this China canoodling affects the standing of NBC News, there are the looming warning signals for Democrats as the 2022 midterm elections beckon. Defending American manufacturing jobs and identifying with blue-collar workers as opposed to U.S. corporations that flock to China with only profits in mind is a winning political slogan, especially in heartland states like Ohio.

But here are Democrats, who would dearly love to portray themselves as the true friend of the working class, finding themselves handcuffed by the frothing forces of identity politics that run roughshod over their party.

Herb Asher, an Ohio State University political scientist, said Ryan’s rhetoric on China is consistent with his career-spanning focus on working-class issues, and pointed out that other prominent Democrats in the state, most notably Sen. Sherrod Brown, have maintained their cross-party appeal by calling attention to the loss of Ohio manufacturing jobs overseas.

“There’s a temptation now to link his ad to what the Republicans are doing, and maybe that’s something he should have anticipated, but, but the whole notion of preserving and growing manufacturing jobs, that’s actually a core message of his career,” Asher said.

“What was heavy-handed about it is the repetition: China, China, China, China, China. There’s very few specific policy proposals. But who is our major economic adversary today in the world? It’s China. In a sense, he’s saying that and, and so I’m not sure that he is saying anything that inaccurate or inappropriate.”