Each of the three items below is extremely noteworthy on its own. But when combined to illustrate the numerous daily happenings that occur across this country today in the routine ongoing disintegration of the United States as a sovereign nation, the impact is all the more disturbing.

There is one overriding theme to it all: The American people have been bitterly betrayed.

Headline: “California built a safety net for millions of undocumented residents. Here’s how it happened.” 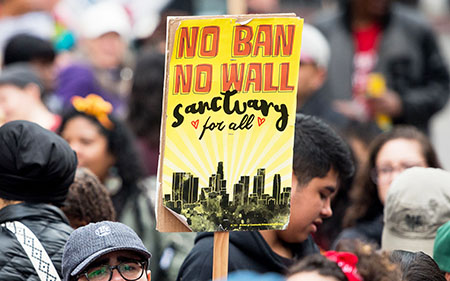 The lengthy piece celebrates what is now established reality in The Golden State and unapologetically champions illegal aliens and the politicians who protect them:

Undocumented immigrants “don’t get out of the system, what they put into the system so I hope this serves as an example to the rest of the country,” said Sen. Maria Elena Durazo, D-Los Angeles. “We’re in the forefront of policies to treat the undocumented as real Americans, real Californians because they contribute so much.”

The Bee points out that this triumph over the rights and standing of the citizens of the nation’s most populous state was years in the making:

California’s expansion of social programs [for illegals] resulted from multiple factors, such as organizing by pro-immigrant advocacy groups who played a long-game in advancing policies during former Gov. Jerry Brown’s administration that Newsom later signed into law and the power a generation of Latino leaders accumulated in the Capitol just two decades after the state’s Republican leaders tried to prohibit any government spending on undocumented immigrants.

The overwhelming success of this long-range plan to normalize illegals in California is indeed stunning:

Now, with undocumented immigrants accounting for as many as 1 in 10 California workers, advocates want to keep their momentum.

“It leaves us surprised to see so many differences,” said [Isabel] Coronel, [a] former farmworker. “But it needs to keep going. And not leave us behind.”

A token quote by an official from an organization opposing massive illegal immigration makes mention of the added burden on taxpayers from all this largesse poured out to non-citizens who openly flout the laws of the nation, but it is quickly countered by proponents of the invasion.

Other than that, there is no hint offered as to the real and substantial pain massive unchecked illegal immigration causes to Americans in their day-to-day lives. Which brings us to our second item.

A mother in Massachusetts is trying to drive this ignored point home. In May, the Bay State legalized granting driver’s licenses to illegals. This slap in the face to the legal citizens of the commonwealth was supported by an organization made up of police chiefs from 38 cities across the state.

“Certainly many, many, many of these individuals contribute to the successes of our respective communities across the state – so we stand behind this bill,” Chelsea Chief of Police Bryan Kyes, who heads the Massachusetts Major City Chiefs of Police Association, said before the legislation passed. “We really deem it to be incredibly important.”

Please excuse Maureen Maloney if she doesn’t share Chief Kyes’ warm regard for the scofflaws in his midst. Her son suffered an unconscionably cruel death at the hand of one of them, a killing that easily could have been avoided if not for the utter callousness of the perpetrator.

“A Milford woman whose 23-year-old son was struck, dragged and killed by an undocumented drunk driver is renewing her push to repeal a state law that grants driver’s licenses to illegal immigrants in Massachusetts as her son’s killer goes before the parole board on Monday,” The Boston Herald reported July 9.

“When you think about it, his life was cut short by, you know, a good 50 to 60 years,” Maloney said of her son, Matthew Denice. “And, you know, it should have been Matthew who was burying me at some point.”

The paper describes the actions of Nicolas Dutan Guaman, an illegal alien from Ecuador:

Denice was riding a motorcycle when he was killed in 2011 by Guaman. The driver was intoxicated when he drove through a stop sign, hit Denice with his pickup truck and dragged him a quarter of a mile as witnesses screamed for him to stop.

“Matthew survived the initial collision, and it was when Guaman was fleeing that he ran Matthew over, and that’s what killed him when he dragged him,” Maloney said. “Matthew was banging on the truck screaming for his life. People outside were banging on his truck, trying to get him to stop. He accelerated. He accelerated when that happened. He didn’t stop.”

Guaman “dragged him to his death,” Carr said. “If he had stopped, (her son) might have survived.”

“Guaman is serving a 12- to 14-year sentence in state prison for manslaughter while driving under the influence and other charges,” The Herald notes. “But if he is not released by the Parole Board, he still could get out as soon as next year if he is credited for good behavior, Maloney said.”

“I will do everything in my power to get him deported,” she vowed.

How galling it must be for this still-grieving mother to see police chiefs across her state doing everything in their power to grant illegals free rein over the road stained by her young son’s blood.

The July 13 press release from U.S. Immigration and Customs Enforcement out of Houston laid out the details of transnational gang mayhem in the southwestern U.S.:

The leader of a robbery “rip crew” that targeted game rooms, human smugglers and drug traffickers was sentenced to 26 years in federal prison July 12 following an investigation by Homeland Security Investigations (HSI) Houston and the Houston Police Department (HPD).

Jose Salomon Madrid-Paz, a 59-year-old unlawfully present Honduran national, was sentenced in the Southern District of Texas to 26 years in federal prison and ordered to pay $30,400 in restitution for interference of commerce by robbery and using a firearm during a crime of violence. He pleaded guilty to the charges Jan. 10.

Following his release from prison, Madrid-Paz is expected to be placed in removal proceedings.

This form of gang activity is apparently common in cities such as Houston:

A “rip crew” is a group of individuals that engages in robberies of businesses and individuals that are unlikely to report the incident to law enforcement. This group was. They were comprised of undocumented migrants from Central America who committed dozens of armed robberies in the Houston vicinity of game rooms, drug dealers and human smugglers.

A 2019 statement from the U.S. Drug Enforcement Administration on the sentencing of rip crew members active in and around McAllen, Texas says it all:

In considering their violent crimes, [U.S. District Judge Micaela] Alvarez stated the events forming the charges are incidents that have come to be expected in Mexico and other Central American countries which do not allow residents to feel safe. The court noted that even though some victims were often drug traffickers themselves, it does not excuse the defendants’ behavior. She furthered that drug trafficking is bad in itself, but is exacerbated when combined with car-jackings and home invasions.

With every passing day, America becomes more and more of a Third World country. In California political offices and among high-ranking police officers in Massachusetts, this is a cause for jubilation.

Meanwhile, Maureen Maloney and Angel Moms like her across the country mourn the loss of loved ones that never would have happened had the immigration laws of this nation been properly enforced.