An election integrity group has discovered via a public records request that thousands of ballots were illegally counted in Arizona’s Maricopa County in the 2020 election.

Verity Vote said it found that Maricopa County received and counted some 20,000 ballots after the election day deadline. 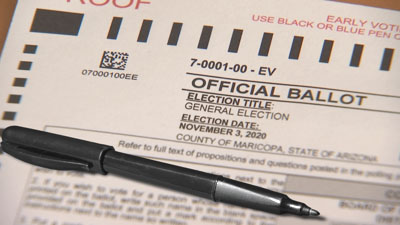 Arizona Law requires that all ballots be received by the county no later than 7 p.m. on Election Day in order for them to be counted and valid.

Verity Vote reported that it obtained delivery receipts from Maricopa County which show that U.S. Postal Service ballots were received on Nov. 4, 5 and 6.

“Any ballots not rejected are accepted by default and tabulated into the election results. Arizona law is clear that it is not an issue of the ballot postmark but the receipt of the ballot by the county prior to 7 p.m. on Election Day,” Verity Vote said.

Verity Vote said that Maricopa County continues to withhold records “claiming that they are stored with the official returns. It is unclear why the Recorder would have transferred these records to the treasurer. The records in the treasurer’s custody can only be examined with a court order. Therefore, Verity Vote can only report that the minimum number is 20,500 late USPS ballot packets.”

The 20,500 ballots were not recorded as “Lates,” which the county defines as ballot packets received after 7 p.m. on election night but before the canvass.

The Receipt of Delivery (RoD) form for the day after the election, Nov. 4, 2020, revealed that 18,000 ballots were picked up from the post office more than 12 hours after the deadline. County Recorder Stephen Richer confirmed to Verity Vote that the RoD was from Nov. 4 at 9:30 a.m.

Verity Vote’s discovery was not mentioned in Arizona Attorney General Mark Brnovich’s interim report on election fraud. Several independent media outlets have noted that Brnovich has not moved to do anything about the massive amounts of evidence of election fraud presented.

Meanwhile, The Gateway Pundit reported that it has confirmed that search warrants were served to an employee at a Yuma County nonprofit organization connected to the alleged illegal ballot trafficking scheme discovered by Yuma County citizens and revealed by True The Vote in the “2000 Mules” documentary.

“18 months ago, we knew that when the full story was told about Yuma, Arizona, it would reveal systematic, systemic, ballot trafficking, with connections that spread nationwide. It’s now happening, thankfully with law enforcement fully engaged. Much more remains to be revealed in the days ahead,” Engelbrecht told Gateway Pundit.