Moral rot in a once-great nation

Is America going the way of ancient Rome? Are we suffering from moral decay and cultural decadence? The answer is: Yes. This is clearly evident all around us.

This is the larger theme of Laura Ingraham’s latest blockbuster, “Of Thee I Zing.” The popular, nationally syndicated radio talk-show host is a rare breed in today’s media landscape: a flinty cultural conservative who defends traditional America against the relentless assault of secular liberalism. Ms. Ingraham’s book is cutting, incisive and sharply written. This is not a dry tome full of statistics, footnotes and empirical data; rather, it is a scathing social criticism of our hypersexualized and celebrity culture as seen from her eyes recounting daily incidents and observations. 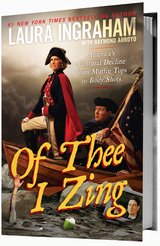 The result is a work that is engaging and fun to read – at times even hilarious.

Ms. Ingraham finds that going to the shopping mall has become a painful experience. This is exactly how I have been feeling for years. Everywhere there are signs of cultural barbarism: preteen girls dressed as streetwalkers; disheveled boys wearing pants below their underwear; mothers in ultratight jeans and low-cut shirts, often with faces distorted by plastic surgery, walking around with their scantily clad daughters; teenagers covered in tattoos and with noses, ears, eyelids, bellybuttons and tongues littered with metal piercings. Ms. Ingraham rightly states that this is not “individual expression.” It is the degradation of the self – the expression of a hedonistic, neo-pagan social order stripped of its Judeo-Christian moorings. The human body is no longer respected but is defamed.

Ms. Ingraham says manners define a culture. The higher they are, the more refined — and elevated — are a country’s public morals. For centuries, Americans understood this. No longer. In movies, television and music, swearing is rampant. Hours are spent social networking and “texting.” Social skills, however, are eroding. Handshakes, politeness, proper greetings, civilized decorum and courteous behavior increasingly are things of the past. Many people are unable to speak proper English. They simply grunt and talk in half-sentences, usually adding adolescent phrases such as “you know” and “like.”
Children are spoiled and overindulged. They lack basic respect for parental authority — never mind for neighbors and strangers. They are conditioned that they must have the latest consumer goods — from Juicy Couture to iPads and iPhones to Gucci. Hence, we are raising an illiterate, narcissistic generation who think being rude and coarse is chic — sorry, “cool.”

America is sliding slowly into a cultural abyss. This is a betrayal not only of our children and grandchildren, but of our forefathers. Since 1776, Americans have expended precious blood and treasure to sustain our experiment in limited government and individual liberty. We did not make such sacrifices so that Hugh Hefner and MTV morality could triumph. In front of our eyes, a social revolution is taking place — one that threatens to drown us in a moral cesspool.

“Is this it?” Ms. Ingraham writes. “Is this what our forefathers fought for? What my parents struggled for? Is this the American culture the Greatest Generation had in mind when they stormed the beaches at Normandy? So we could aspire to be like the Kardashians or land a role on ‘The Housewives of Miami?’ ”
No, that isn’t why U.S. troops perished in France liberating Europe from Nazi occupation. It also is not why Americans gave up their lives in Korea and Vietnam or continue to bleed in Iraq and Afghanistan. No one is willing to die — nor should he — for the Playboy philosophy. The reason is simple: It leads to cultural suicide.

What Ms. Ingraham describes is the natural, almost inevitable culmination of the 1960s sexual revolution. Radical leftists championed personal liberation and a godless society. They began what they called the “long march through the institutions.” They have succeeded. They now occupy the commanding heights of our culture — the dominant media, universities, public schools, Hollywood, television, the entertainment industry, nongovernmental organizations and the arts. Even many religious institutions have been infiltrated.

The result has been a sea of misery. Abortion has slaughtered nearly 50 million unborn babies. Millions have died from AIDS and other sexually transmitted diseases. Out-of-wedlock teenage births have skyrocketed. Divorce has soared. The family has broken down. Drugs, pornography and permissiveness are rampant. Homosexuality and sodomy have been elevated to the sacred status of marriage. In some school districts, such as in New York City, 10- and 11-year-old students are being taught all manner of sexual practices. In short, we have created a culture of death.

Ms. Ingraham shows there are still some who refuse to surrender to this growing moral darkness. Unless America returns to its Christian values, we are doomed. Living in the United States of Entertainment is not much fun after all.