Trump has “wondered aloud if there may be any way to go after Amazon with antitrust or competition law,” a source told Axios in a March 28 report. 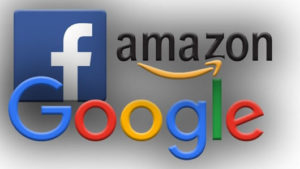 The president has “talked about changing Amazon’s tax treatment because he’s worried about mom-and-pop retailers being put out of business,” the report said.

CNBC reported that Amazon shares fell 4.4 percent after the Axios report, wiping out more than $31 billion in shareholder value.

Trump had tweeted in August of last year that “Amazon is doing great damage to tax paying retailers. Towns, cities and states throughout the U.S. are being hurt – many jobs being lost!.”

Treasury Secretary Steven Mnuchin told a House Ways and Means Committee hearing in February that the administration “feels strongly” the government should institute a sales tax on Internet e-commerce.

The Axios report noted that “Trump’s deep-seated antipathy toward Amazon surfaces when discussing tax policy and antitrust cases. The president would love to clip CEO Jeff Bezos’ wings. But he doesn’t have a plan to make that happen.”

In June of last year, Trump tweeted: “The #AmazonWashingtonPost, sometimes referred to as the guardian of Amazon not paying internet taxes (which they should) is FAKE NEWS!”

As for Facebook and Google, the Axios report cited a source saying Pence “isn’t yet pushing internally for any specific regulations,” but “argues these companies are dangerously powerful.”

The source said Pence is concerned about the Internet giants’ influence on media coverage, their control of the advertising industry and users’ personal info.

“When private discussions have turned to the idea of busting Facebook and Google, Pence has listened with keen interest and is open to the suggestion that these two companies need shaking up,” the report said.