Marketing campaign, Phase II: Having a heart attack in your twenties is normal

“Seemingly healthy” and suddenly dead is becoming a routine part of the 24-hour news cycle these days, and, ominously, it is not just about coronavirus vaccine injury denial. A far more sinister phase of the operation has commenced.

As WorldTribune reported July 12, a Big Pharma trade publication is anticipating a “new blockbuster heart disease market” in the coming years. Disease markets are expanded by increased diagnosis, thus there will be an organized push for heart condition awareness on a grand scale. 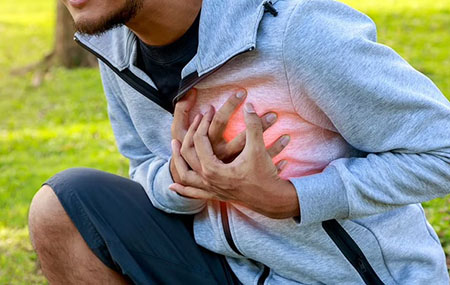 The overwhelming evidence that the experimental gene therapy treatment misleadingly called a vaccine has led to a surge in heart ailments will of course continue to be downplayed by the dominant media outlets that are openly aligned with and often directly financially tied to the vaccine wing of the ruling medical establishment.

But heart disease among the young must be normalized. It’s good for business in two ways. It serves as a defense for the jab while helping inflate a burgeoning revenue stream opportunity to maximum effect. Oh, you don’t think the people who brought America Vioxx and the opioid crisis could be so ruthless?

A July 12 article in The Los Angeles Times illustrates how the controlled media operates. “He worked from home and died suddenly. Five days passed before his body was found,” the attention-grabbing headline declares. Naturally, anyone clicking onto the article would like to be informed as to how the person in question died.

Good luck with that. The reader has to slog through a wall of text detailing a long and winding tale about how difficult it is to be young and a remote worker before finally getting to what killed this young man out of the blue at age 28:

In late May, four months after Dominic’s death, his parents received the results from his autopsy.

It was a natural death, the L.A. County medical examiner’s office found. Dominic, seemingly healthy, died of cardiomyopathy, a heart condition that can cause sudden death.

By all indications, Dominic got ready for bed that Wednesday night, lay down to sleep and simply never woke up.

See, it’s natural. Just one of those things that happen. A 28-year-old man with no outstanding health complaints goes to bed one night and never wakes up again. But let’s talk about new challenges in the modern workplace. That’s the real story here, right?

Dominic Green was an epidemiologist working out of Los Angeles, a progressive-dominated city that fanatically embraced the most tyrannical elements of the coronavirus social curb regimen. He reportedly worked as a contractor for the L.A. County Department of Public Health. Yet instead of any mention of the vaccine, the Times presents his perplexing death as a rite-of-passage story for young people today that can have an increasingly-familiar sad ending.

Meanwhile, some 120 miles to the south, a San Diego mother of two also died of a heart attack at that same unfathomable age of 28. Here’s how local television station ABC-10 reported it on July 5:

Last week, a North County Family went on a vacation to Mexico, but things took an unexpected turn when a mother of two young girls had a heart attack and died.

A twentysomething suffering a fatal heart attack isn’t profoundly shocking, it is merely an unanticipated occurrence. See how they do it?

Perhaps a clue can be found as to how the “unexpected” occurred:

Alejandra was a second-grade teacher at Lincoln Elementary who loved her students and her two girls.

The local ABC affiliate wouldn’t reveal it but the San Diego school district actually crafted a tougher coronavirus vaccine mandate for teachers than that enacted by the radically progressive state of California:

San Diego CBS affiliate KFMB-TV reported in January that the school district was determined to strictly enforce its teacher mandate:

San Diego Unified School District has sent termination notices for dozens of workers because of failing to comply with the district’s COVID-19 vaccination mandate. Monday marks the date set by SDUSD as the day it would enforce consequences for staff who fail to get fully vaccinated or get an approved exemption.

Teachers related their feelings of being bullied on the issue:

Many teachers who spoke to CBS 8 on Sunday said they were nervous to go on camera to talk about the sensitive topic. Some said they were confused and upset but worry about retaliation if they speak up.

As the station makes clear, the heavy-handed tactics have worked:

Given all this, shouldn’t a responsible news source at least inquire about the vaccine status of a 28-year-old teacher and mother of two who suddenly dies of a heart attack?

Also expect to see more lifestyle articles like this June piece in news-magazine outlets such as NBC’s Today, which features a subheading in bold type labeled “’Massive heart attack’ at 30”:

“Heart disease does not discriminate by age. And while most patients do have risk factors for heart disease, such as high blood pressure, high cholesterol, diabetes, smoking, Ethan did not,” he said. “We do see this in young patient in their 20s, 30s and 40s that have heart attacks really prematurely without any obvious risk factors.”

So if you’re keeping score at home, we have one health employee, who was contracted to do government work, one teacher and one police officer all being the subject of dominant media outlet coverage after suffering heart attacks at acutely young ages. All three would be expected to have been heavily pressured, if not outright forced, to get jabbed in order to keep their jobs. And yet each report leaves this out entirely while weaving a “Life” section-style narrative behind their experiences.

It’s a two-pronged approach now. The first flank, decreeing that the jab does not significantly elevate the risk of heart disease, will continue. At the same time, a new phase intended to acclimate people to the notion that 28-year-olds have heart attacks and drop dead on a dime is well underway.

Covid vax, Next phase of jab fallout spin campaign is here: Having a heart attack in your twenties is normal, WorldTribune.com