Manufactured crisis? Skeletons and prayer rugs in the desert

The grim discovery of the skeletons of 127 dead migrants in southern Arizona in 2018 and reports of a significant increase in OTMs (other than Mexicans) crossing the U.S. southern border contradict the major media’s and Democrats’ assertion that the illegal immigration situation is a “manufactured crisis.”

The Trump administration has stated that 3,700 people who were identified as coming from countries with terrorism problems have also been apprehended at the border. 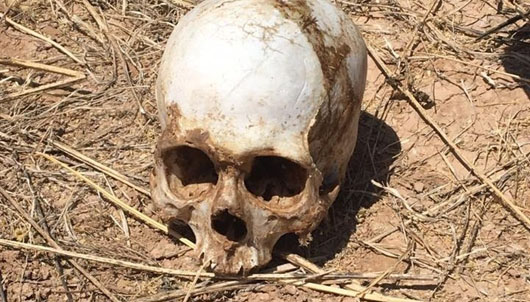 “We’ve talked about the thousands – the thousands of terror watchlist individuals who traveled through our hemisphere last year,” Homeland Security Secretary Kirstjen Nielsen said on Fox News earlier this month. “To pretend there’s not a danger on an unsecured border, on an open border, is just ridiculous. It belies common sense.”

In 2018, the remains of 127 dead migrants were recovered in southern Arizona, according to the Pima County Medical Examiner’s Office.

Of the 127, 86 remains found in 2018 were skeletal or partially skeletal, with the cause of death unknown, the data show. Another 25 migrants died of probable hyperthermia, the data indicated. Hyperthermia is when the human body becomes too hot.

From 2001 through 2018, the remains of at least 3,011 dead migrants have been recovered in southern Arizona, according to the Humane Borders website.

Ranchers and farmers who live near the U.S.-Mexico border have reported finding mats assumed to be prayer rugs on their properties in recent months, the Washington Examiner reported, citing a rancher who asked to remain anonymous for fear of retaliation by cartels.

The rancher and six other residents of Animas told Washington Examiner this week that migrants from places other than Mexico and Central America are arriving.

“I’ve talked to several agents that I trust. There’s not a lot that I do trust, but the ones I do trust, I talk to them,” she said during a tour of her property. “What Border Patrol classifies as OTMs [other than Mexicans] has really increased in the last couple years, but drastically within the last six months. Chinese, Germans, Russians, a lot of Middle Easterners, those Czechoslovakians they caught over on our neighbor’s just last summer.”

Billy Darnell, a cattle rancher in Animas, said his neighbor had 18 women and children from the Philippines show up on his property last year. Border Patrol was called to the scene and took the group in.

Government data indicates six known or suspected terrorists were caught trying to enter the U.S. from Mexico from Oct. 1, 2017, through March 31, 2018.

The mats are pieces of carpet that those of the Muslim faith kneel on as they worship.

“There’s a lot of people coming in not just from Mexico,” the rancher said. “People, the general public, just don’t get the terrorist threats of that. That’s what’s really scary. You don’t know what’s coming across. We’ve found prayer rugs out here. It’s unreal. It’s not just Mexican nationals that are coming across.”