All military brigades in Libya’s third-largest city were deployed to a key crossroads on May 6 after it was overrun by Islamic State of Iraq and Levant (ISIL) jihadists.

ISIL advanced on the Abu Grein crossroads, 120 kilometers (74.5 miles) south of Misrata, in an assault in which a suicide bomber killed two police officers. 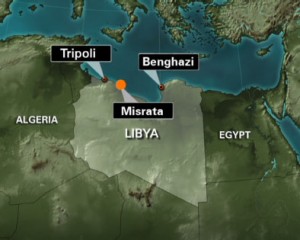 The crossroads is situated where the highway along Libya’s Mediterranean coast meets the main road south into the desert interior.

Col. Ibrahim Bel-Rajab, commander of the Misrata military council, said he had ordered all brigades under his command to head to Abu Grein, Libya’s LANA news agency reported.

“Numerous armed vehicles of ISIL have been spotted in this area,” he said.

Misrata’s two main television channels broadcast appeals to militiamen on leave to return to their barracks.

ISIL said in an online statement that a Tunisian jihadist had blown up a vehicle at the crossroads, allowing other fighters to advance and take control of it and five villages in the area, the SITE Intelligence Group reported.

ISIL is estimated to have around 5,000 fighters in Libya.

Libya militias scramble to halt ISIL advance on country’s third-largest city added by Editor One on May 6, 2016
View all posts by Editor One →