The Chicago Sun-Times: “That’s the risk we as a nation now run. Rittenhouse’s ‘not guilty’ verdict could easily embolden and encourage gun-toting civilians to carry frighteningly powerful weapons on our streets and at gathering places, under the guise of supposedly protecting ‘law and order.’ ”

MSNBC’s Joy Reid has insisted that any black person carrying an AR-15 in Kenosha would be immediately shot by police.

Memo to the Left, there’s this: 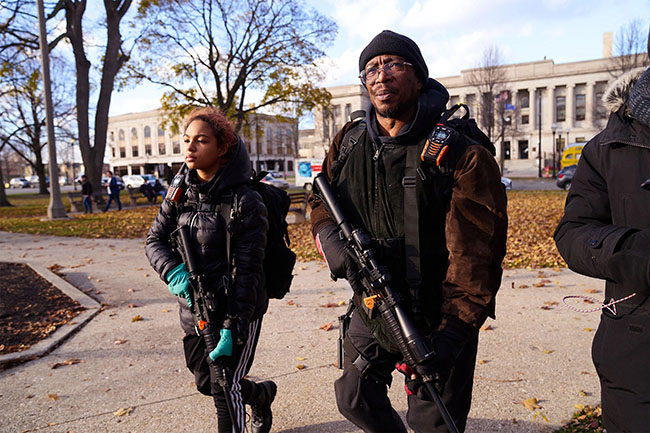 That is Erik Jordan and his daughter, Jade, toting AR-15 rifles near the Kenosha County Courthouse on Nov. 21.

The 50-year-old Erik Jordan said that he had trained daughter Jade, 16, to use firearms from the age of four, but that he had only allowed her to touch a weapon when she reached 14. Kyle Rittenhouse was 17 the night he shot three rioters in Kenosha, two of whom died. He was acquitted of all charges in the case.

The Jordans said that they had been protecting a restaurant and two parking lots in the area on the night that the Rittenhouse shootings took place. Erik and Jade Jordan were not shot by police on that night.

When they carried their AR-15s back to the streets of Kenosha to reportedly protect protesters of the Rittenhouse verdict, Erik and Jade Jordan again were not shot by police.

Left claimed any blacks carrying AR-15s in Kenosha would be shot by police added by Editor Two on November 23, 2021
View all posts by Editor Two →