The coup being waged against President Donald Trump by Democrats and their media allies was set in motion by the Obama administration immediately after the 2016 election, author Lee Smith writes in his new book.

The Plot Against the President: The True Story of How Congressman Devin Nunes Uncovered the Biggest Political Scandal in U.S. History was released on Oct. 29. 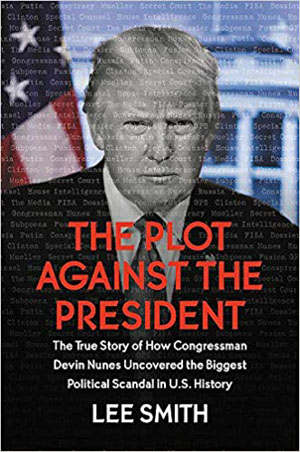 The following excerpts from Smith’s book were carried by The Federalist on Oct. 28:

After Donald Trump was elected forty-fifth president of the United States, the operation designed to undermine his campaign transformed. It became an instrument to bring down the commander in chief. The coup started almost immediately after the polls closed.

Hillary Clinton’s communications team decided within twenty-four hours of her concession speech to message that the election was illegitimate, that Russia had interfered to help Trump.

Obama was working against Trump until the hour he left office. His national security advisor, Susan Rice, commemorated it with an email to herself on January 20, moments before Trump’s inauguration. She wrote to memorialize a meeting in the White House two weeks before.

On January 5, following a briefing by IC leadership on Russian hacking during the 2016 Presidential election, President Obama had a brief follow-on conversation with FBI Director Jim Comey and Deputy Attorney General Sally Yates in the Oval Office. Vice President Biden and I were also present.

President Obama began the conversation by stressing his continued commitment to ensuring that every aspect of this issue is handled by the Intelligence and law enforcement communities “by the book.” The President stressed that he is not asking about, initiating or instructing anything from a law enforcement perspective. He reiterated that our law enforcement team needs to proceed as it normally would by the book.

From a national security perspective, however, President Obama said he wants to be sure that, as we engage with the incoming team, we are mindful to ascertain if there is any reason that we cannot share information fully as it relates to Russia. . . .

The President asked Comey to inform him if anything changes in the next few weeks that should affect how we share classified information with the incoming team. Comey said he would.

The repetition of “by the book” gave away the game — for there was nothing normal about any of it.

Rice wrote an email to herself. It commemorated a conversation from two weeks before. The conversation was about the FBI’s investigation of the man who was about to move into the White House—an investigation from which Obama was careful to distance himself. During the conversation, the outgoing president instructed his top aides to collect information (“ascertain”) regarding the incoming administration’s relationship with Russia.

“To any rational person,” says Nunes, “it looks like they were scheming to produce a get-out-of-jail-free card—for the president and anyone else in the White House. They were playing Monopoly while the others were playing with fire. Now the Obama White House was in the clear—sure, they had no idea what Comey and Brennan and McCabe and Strzok and the rest were up to.”

In the administration’s last days, it disseminated intelligence throughout the government, including the White House, Capitol Hill, and the intelligence community (IC). Intelligence was classified at the lowest possible levels to ensure a wide readership. The White House was paving the way for a campaign of leaks to disorient the incoming Trump team.

Obama’s biggest move against Trump was to order CIA director John Brennan to conduct a full review of all intelligence relating to Russia and the 2016 elections. He requested it on December 6 and wanted it ready by the time he left office on January 20. But the sitting president already knew what the intelligence community assessment (ICA) was going to say, because Brennan had told him months before.

Brennan’s handpicked team of CIA, FBI, and NSA analysts had started analyzing Russian election interference in late July. In August, Brennan had briefed Harry Reid on the dossier and may have briefed Obama on it, too. Earlier in August, Brennan sent a “bombshell” report to Obama’s desk.
When Brennan reassembled his select team in December, it was to have them reproduce their August findings: Putin, according to Brennan, was boosting the GOP candidate. And that’s why only three days after Obama ordered the assessment in December, the Washington Post could already reveal what the intelligence community had found.

“The CIA,” reported the December 9 edition of the Post, “has concluded in a secret assessment that Russia intervened in the 2016 election to help Donald Trump win the presidency, rather than just to undermine confidence in the U.S. electoral system.”

The ICA that Obama ordered gave political operatives, the press, and his intelligence chiefs a second shot at Trump. They’d used the Steele Dossier to feed the echo chamber and obtain surveillance powers to spy on the Trump campaign. The dossier, however, had come up short. Trump had won.

But now, on his way out of the White House, Obama instructed Brennan to stamp the CIA’s imprimatur on the anti-Trump operation. As Fusion GPS’s smear campaign had been the source of the preelection press campaign, the ICA was the basis of the postelection media frenzy. It was tailored to disrupt the peaceful transition of power and throw the United States into chaos.

Because Trump hadn’t been elected by the US public, according to the ICA, but had been tapped by Putin, he was illegitimate. Therefore, the extraconstitutional and illegal tactics employed by anti-Trump officials were legitimate. The ultimate goal was to remove Trump from office.

“If it weren’t for President Obama,” said James Clapper, “we might not have done the intelligence community assessment . . . that set off a whole sequence of events which are still unfolding today.”

Anti-Trump operatives recognized that Nunes was going to be a problem. The HPSCI chair had previously called out the IC for politicizing intelligence. “They said that we had defeated Al Qaeda in Iraq and Syria,” says Nunes, “and I knew that wasn’t true. Then they withheld the Osama bin Laden documents to conceal that Al Qaeda worked with Iran, because the administration was protecting the Iran deal. So when I saw them changing this assessment of the 2016 election in midstream, I knew it was the same old trick: they were politicizing intelligence.”

The speed with which Brennan’s handpicked analysts produced the ICA and then got a version of it declassified for public consumption was another sign that something wasn’t right. “All throughout Obama’s two terms, his IC chiefs aren’t paying attention to Russian actions,” says Nunes. “We give them more money for Russia, which they don’t use. But now they know so much about Putin that they manage to produce a comprehensive assessment of Russian intentions and actions regarding election interference in a month—at Christmastime, when everything slows down. And then they produce a declassified version in a manner of weeks. None of this is believable.”

The FBI had been working from Steele’s reports for more than half a year. Including the dossier along with the ICA would provide Comey with ammunition to take on the president-elect. Both he and Brennan were manipulating intelligence for political purposes.

Nunes realized even then the purpose of Obama’s dossier. “Devin figured out in December what was going on,” says Langer. “It was an operation to bring down Trump.”

There was no evidence that any Trump associate had done anything improper regarding the Russians, and Nunes was losing patience. “We had serious things the committee wanted to do,” he says. “With Trump elected, we could do some big stuff, like with China.”

Still, it was important for HPSCI to maintain control of the Russia investigation. Otherwise, Democrats and Never Trump Republicans were likely to get their wish to convene a bipartisan commission to investigate Russian interference—with the purpose of turning it on Trump.

“Before they started floating the idea of a special counsel, the big idea was a special commission like the 9/11 Commission,” says Langer. It was outgoing secretary of state John Kerry who first came forward with the proposal.

The point was to change the power dynamic. “In a normal committee,” says Langer, “the majority has the power, and that happened to be us. They wanted to strip our power and make it fifty-fifty.”

“Bipartisan” was a euphemism for “anti-Trump.” “It would have been a complete joke,” says Nunes. “A combination of partisan hacks from the left and people who hated Trump on the right.”

Democrats led by Schiff and Senate minority leader Chuck Schumer were joined by the late John McCain, the most active of the Never Trump Republicans. After the election, the Arizona senator had instructed his aide David Kramer to deliver a copy of the Steele Dossier to Comey.

“God only knows who they’d have populated that committee with,” says Nunes. “Anyone they could control. It would have been a freak show.”

Speaker of the House Paul Ryan defended HPSCI’s independence. On the Senate side, Intelligence Committee chairman Richard Burr had only one move. To deflect demands for an independent commission, he effectively ceded control of the Senate investigation to his vice chair, Democrat Mark Warner.
Still, Nunes believed that all the talk of Trump and Russia was a waste of time. “They kept promising us evidence of collusion, week after week, and they came up with nothing.”

Nunes’s disdain for the ICA forced the Crossfire Hurricane team’s hand. “Right around the time that they came out with the ICA, they kept saying that we were waiting on something to show us, something important that was coming in,” he says. “They said it was some significant figure who they couldn’t quite track down yet.”

But the FBI knew exactly where its missing link was, the piece of evidence that they thought would convince hardened skeptics like Nunes that collusion was real. They didn’t have to chase him down, because he was sitting at home in Chicago. He submitted to a voluntary interview January 27 and without a lawyer because he had no idea what the FBI had in store for him.

The Crossfire Hurricane team was figuring how they were going to set up the Trump adviser they’d used to open up the investigation in July 2016: George Papadopoulos.