A government watchdog group announced it has filed a lawsuit against Kentucky over the state’s failure to reasonably maintain its voter registration lists. 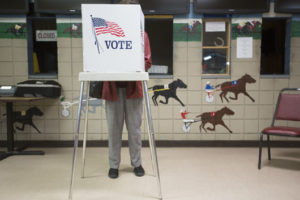 Judicial Watch alleges in the lawsuit that 48 Kentucky counties have more registered voters than citizens over the age of 18.

“Federal law requires states to take reasonable steps to clean up their voting rolls – and clearly Kentucky hasn’t done that. Dirty voting rolls can mean dirty elections. This lawsuit aims to ensure that citizens can have more confidence that elections in Kentucky won’t be subject to fraud.”

Judicial Watch noted that Kentucky “is required by law to disclose to the federal Election Assistance Commission the number of inactive registrations it carries on its voter rolls. It failed to do so. Kentucky is also required to report the number of address confirmation letters it sent to citizens who were thought to have moved out of state. It failed to release this information as well.”

Additionally, Kentucky is required by the NVRA to keep registration-related records and to make them publicly available on request. Judicial Watch said it made such a request, and Kentucky initially promised to disclose these records, “but it broke this promise and, to date, has failed to make records available.”

Judicial Watch previously filed successful lawsuits under the NVRA against Ohio and Indiana that resulted in those states taking several actions to clean up their voting rolls.