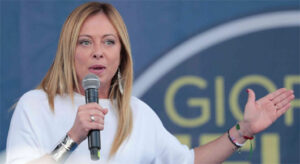 With the election of right-wing candidate Giorgia Meloni as Italy’s first female Prime Minister, the Left has announced they no longer support strong, independent women.

“This is an absolute disaster. Maybe women do belong in the kitchen,” said Italian Leftist Atlantic contributor Gianna Mozzarella. ….

Experts in the EU, the World Economic Forum … are warning that Meloni is extremely dangerous.

Schwab continued: “She is a danger to our glorious dream of a New World Order because she believes in things like family and the infinite worth of the individual — which, I must remind you — are things only fascists believe in.”

Klaus Schwab’s ‘glorious’ plans for humanity threatened by ‘far-right extremist fascist’ woman added by Editor One on September 27, 2022
View all posts by Editor One →