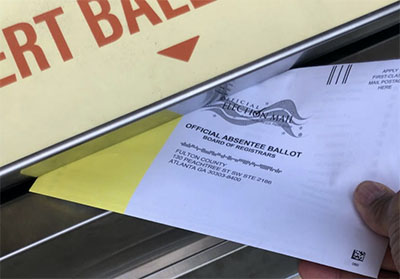 VoteAmerica sued the state in an effort to kill portions of Georgia Senate Bill 202 that add certain requirements for organizations or individuals that mail prefilled absentee ballot applications to potential voters. VoteAmerica alleged that three provisions of the law infringed on their First Amendment right to free speech.

In siding with the state, Judge J.P. Boulee of the U.S. District Court for the Northern District of Georgia ruled that the law did not violate VoteAmerica’s First Amendment rights.

Further, the absentee ballot applications must include the following disclaimer printed on the front of the form: “This is NOT an official government publication and was NOT provided to you by any governmental entity and this is NOT a ballot. It is being distributed by [insert name and address of person, organization, or other entity distributing such document or material].”

The court added that the state’s disclaimer “simply presents information designed to reduce voter confusion regarding absentee ballot applications provided by third parties and to relieve election officials of the administrative burdens resulting from such confusion.”

The court granted deference to the state law because it did not “impose an outright ban on third-parties’ distribution of absentee ballot applications and instead chose to regulate only the specific parts of the process that are problematic.”

The court also said that striking down those provisions of the law in the middle of an election cycle would confuse voters even more.

“Third parties who may not be aware of these proceedings are presumably already preparing to distribute ballot application forms bearing the current Disclaimer. A ruling requiring a different disclaimer could cause two different application forms to be in circulation,” the judge wrote. “Prospective voters who receive both versions of the form could be confused by the conflicting statements. The Court is also mindful of unintended consequences of late-breaking changes to the law.”

Georgia Secretary of State Brad Raffensperger, along with the Republican National Committee (RNC), argued that the ballot application provisions are necessary because the Secretary of State’s office received “numerous complaints” from the public about third-party organizations sending these applications.