Joe did that: No relief in sight for surging gas prices, expected to top $5 this month, $6 by August

Thanks to Bidenflation, gas prices hit another record high on June 1 with a national average of $4.671 per gallon. 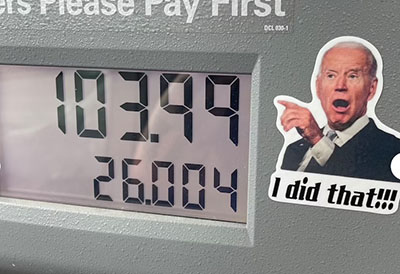 The price at the pump is expected to reach $5 a gallon on average by as early as June 17, according to Patrick De Haan of GasBuddy.

In California, fuel at some stations tops the federal minimum wage of $7.25 per hour and the most expensive gas in the Golden State tops $9 per gallon.

Americans could be paying an average per-gallon price of $6.20 by August, according to JPMorgan analyst Natasha Kaneva.

“U.S. consumers should not expect much in the way of relief in prices at the pump until the end of the year,” Kaneva predicted.

$6 by August, expected to top $5 this month, Joe did that: No relief in sight for surging gas prices, WorldTribune.com

Joe did that: No relief in sight for surging gas prices, expected to top $5 this month, $6 by August added by Editor Two on June 1, 2022
View all posts by Editor Two →