Islamic State of Iraq and Levant (ISIL) jihadists broke through Syrian regime defenses on Jan. 16 to seize control of an area used by the World Food Program (WFP) to deliver vital supplies to civilians.

ISIL fighters surrounded the military airport near Deir Ezzor, cutting off food supplies for some 250,000 Syrians in what observers say could lead to a major humanitarian disaster. 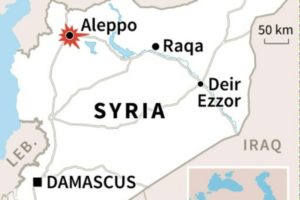 The military airport in Deir Ezzor, manned by elite units from the Syrian Republican Guard, had withstood several previous assaults by ISIL.

Sources from the area said the ISIL fighters were primarily reinforcements who crossed the border from Iraq’s Anbar province, broke through government lines and split its territory in half, taking control of the area where the WFP’s airdrops landed.

The WFP announced on Jan. 16 that it had halted its airdrops in the area.

Observers believe the aim of the ISIL assault on Deir Ezzor is to pre-empt any Syrian government offensive on ISIL territory while the terror group is distracted by battles elsewhere. The area under ISIL control in the city is hemmed in by government forces to the south and the Euphrates river to the north.

ISIL “most likely wanted to take the initiative and prevent regime attacks, cut off government soldiers in the city, and put a stop to the airdrops,” a source said.

“Their positions right now are exposed so they’re likely to move towards the military airport and seize civilian districts to take shelter there, so the regime can’t attack them unless they adopt a scorched-earth policy.”