Is Alex Soros such a magnetic personality that Democrats are lining up to take selfies with the son of billionaire leftist George Soros?

“Love this man!” Alex Soros wrote on Instagram along with a photograph of him with vice presidential hopeful Tim Kaine. “Was great to have dinner with a man we need to call one day #vicepresident @timkaine last night! He is definitely the real deal!” 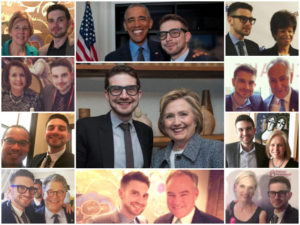 Since that post isn’t actually awe inspiring, the more likely conclusion is, as former President Bill Clinton would say – it’s the cash, stupid.

“The fact that Alex Soros, who was inspired in his own progressivism by his controversial father, has unfettered access to Kaine — Hillary Clinton’s running mate — is unsurprising,” Breitbart wrote.

Alex Soros’ summit with Kaine followed high-profile meetings he has had with several top Democrats, including one with Hillary Clinton during the Democratic National Convention (DNC) in Philadelphia.

“There can only be one #womancrushwedensday today and that is of course @hillaryclinton, not just for being the first woman to run for president from this nation’s two largest political parties, but I believe the best presidential candidate this nation could have today! Looking forward to seeing her crush it tomorrow! #wcw #hillaryclinton,” Soros wrote about his meeting and photograph with Clinton.

According to a Breitbart report on Aug. 15, the billionaire’s boy also had “at least two meetings with the sitting president of the United States — Barack Obama — photos of which he posted on July 4, and June 14.” In the July 4 posting, Soros bashed the United Kingdom’s decision to vote to “Leave” the European Union — called Brexit.

“A special #july4th #mancrushmonday for president @barackobama! Had European leaders and voters taken his advice they wouldn’t be in this current mess,” Soros wrote with the July 4 Obama picture. “After this farce called #brexit, I have never been more grateful to be American and for the institutions of #federalism, a written constitution, and a leader who doesn’t runaway from his obligations! #independenceday #obama #mcm”

“Perhaps more importantly here than just donor class globalist access to the Clinton apparatus, this Soros-Kaine summit for Hillary Clinton’s campaign highlights how over the past few weeks this presidential election has become a true referendum for the major issues that Donald Trump wants the campaign to be about,” the Breitbart report said.

“First off, despite her claims to now oppose the mega-trade deal she once supported as the ‘gold standard’ of trade deals, the fate of the Trans Pacific Partnership (TPP) will be decided by voters in November. A vote for Donald Trump is a vote to eviscerate the TPP, and all deals like it…

“…While Hillary Clinton says she opposes it now, everyone knows that she would simply make a few minor changes to it, repackage it and force it through Congress on the fast-track Trade Promotion Authority (TPA). Trump, meanwhile, would nuke it entirely and offer Americans a whole new approach to trade policy that puts Americans first.”

Breitbart noted that George Soros “supports the Trans Pacific Partnership on the condition that it add China into the mix — something Hillary Clinton has not ruled out, while Trump has.”