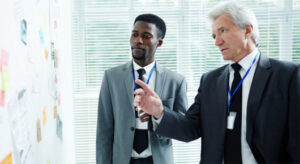 [Informed sources report there are morale issues in the Federal Bureau of Investigation (FBI) related to difficulties investigating crimes, the planning and execution of which did not involved FBI operatives.]

“Yeah usually solving crimes is so easy, because we’re the ones that do them,” said [a source claiming to be] Director Christopher Wray. “We stage the crime, then we commit the crime or entrap someone into committing it for us, and BOOM! Case closed. I love open and shut cases like that.”

“Unfortunately, in rare cases, you see crimes getting committed by someone who isn’t even in the FBI. That makes it tough because we don’t have their phone number and stuff. We have to track all that down. It’s really hard.”

With federal crimes not committed by the FBI on the rise, investigators are investing in detective stuff like long trenchcoats and magnifying glasses to help them solve those really difficult cases when they don’t already know who did it.

Insiders report FBI officials stressed by freelance crimes in which they played no role added by Editor One on September 23, 2021
View all posts by Editor One →