Inconvenient journalism: Check this 2015 NBC report on a Nobel prize and ivermectin

In 2021, Big Media have continually warned that taking ivermectin as a treatment for Covid is akin to consuming manufactured poison.

The drug, narrative-spinners insist, is meant for horses, not humans. 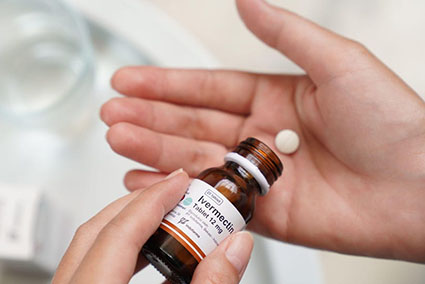 The narrative has changed.

In 2015, ivermectin was being lauded by the same media as a miracle drug developed from soil bacteria which saved “countless” human lives.

The following is excerpted from an Oct. 5, 2015 article by NBC News headlined “Nobel Goes to Pioneers of Natural-Based Medicines”.

Three scientists who discovered natural-based remedies against parasites that cause malaria and river blindness won the Nobel Prize of Medicine on Monday.

The compounds – called artemisinin and ivermectin – are used by millions of people around the world and have saved countless lives. Ivermectin – which now is used to fight pests from bed bugs and lice to serious diseases such as lymphatic filariasis – was derived from naturally occurring bacteria in soil.

The winners – from Japan, China and the United States – worked separately to find medicines that were synthesized into powerful and effective drugs.

“These two discoveries have provided humankind with powerful new means to combat these debilitating diseases that affect hundreds of millions of people annually. The consequences in terms of improved human health and reduced suffering are immeasurable,” the Nobel committee said.

Ivermectin works against the parasites that cause river blindness and lymphatic filariasis, also called elephantiasis, which is marked by grossly swelling limbs called by the buildup of lymphatic fluids. It affects 100 million people around the world.

“Treatment is so successful that these diseases are on the verge of eradication, which would be a major feat in the medical history of humankind,” the Nobel committee said.

The Paradise blog, picking up on ivermectin and the 2015 Nobel Prize, noted that the drug has also been cited as “a multifaceted drug of Nobel prize-honored distinction with indicated efficacy against a new global scourge, Covid-19” and already has a substantial data set collected in randomized clinical trials that “found notable reductions in Covid-19 fatalities.”

“And yet,” The Paradise blog noted, “you have regulatory agencies like the U.S. Food and Drug Administration (FDA), the same health cabal that just waved through the ‘full approval’ of Covid shots, engaging in sophomoric rhetoric about the drug” as seen in a recent social media campaign.

“It’s as if only so-called conspiracy theorists or the politically conservative believe in the promise of ivermectin – everyone else is ‘following the science’ like good proles and therefore any dissenters should just sit down and shut up,” The Paradise blog noted.

The effectiveness of ivermectin as a Covid treatment has been documented from as far back as April-May 2020, when reports out of India said ivermectin was “obliterating” Covid.

In a May report, WorldTribune.com noted that Dr. Pierre Kory of the Front Line Covid-19 Critical Care Alliance outlined numerous details showing the World Health Organization (WHO) knowingly suppressed data on the effectiveness of ivermectin against the virus in order to benefit the vaccine interests of Big Pharma.

“Knowing all of this, wouldn’t public health officials and their media operatives want to at least acknowledge these findings and study ivermectin’s use as a therapeutic just a little closer before dismissing it out of hand? Of course not, that would mean cutting into Big Pharma’s sales,” The Paradise blog concluded.

Inconvenient journalism: Check this 2015 NBC report on a Nobel prize and ivermectin added by Editor Two on September 6, 2021
View all posts by Editor Two →