In waning days of presidency, Obama moves to save transgender bathrooms

With just days left in his final term, President Barack Obama is seeking to re-institute an executive order on transgender bathrooms that was shot down by a district court.

Lawyers for the Obama administration asked an appeals court to overturn a judge’s ruling that suspended enforcement of Obama’s order allowing transgender students and workers to use the public bathroom of their gender identity. 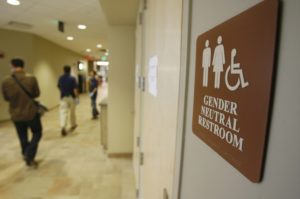 The Justice Department asked the 5th U.S. Circuit Court of Appeals to throw out O’Connor’s ruling, arguing the courts do not have the power to review the government’s order. They also argue O’Connor’s ruling was too broad, as it applied to the entire country, instead of the states challenging the order.

In a letter to school districts across the country in May, the Obama administration said “a school’s failure to treat students consistent with their gender identity may create or contribute to a hostile environment in violation of Title IX,” in reference to the federal law banning gender discrimination in education.

The administration argued that the “guidelines” it issued only reflects its interpretation of Title IX, and is not and order bearing the full force of law. Supporters of the guidelines contend that they were issued because of ambiguities in Title IX, since the law does not address how a school should accommodate a transgender student. As a result, they argued the court must defer to their interpretation of the law, since a court may not overturn an agency’s interpretation so long as it is “reasonable.”

A coalition of a dozen states, led by Texas, accused the Obama administration of playing a “regulatory shell game” by issuing the guidelines by means of regulatory “dark matter,” a deluge of agency directives, notices, memoranda, guidance documents, and even blog posts that effectively create new policy without congressional legislation or Administrative Procedure Act (APA) protocols.

The states claim that Obama’s strategy allows agencies to evade review by the courts and achieve their policy objectives — because the guidance stems from so-called “dark matter,” it technically lacks the force of law and therefore cannot be reviewed by the courts. Nonetheless, school districts that do not abide by the guidelines are being targeted for punishment, ensuring they comply with the new rules.