Two major Democrat candidates, one for governor, the other for a U.S. Senate seat, are the face of a radical new normalization of illegal aliens that has put those who break this nation’s immigration laws at the very center of American political power.

In Massachusetts, the leading Democrat candidate for governor has named an illegal alien as a top staffer to her campaign. 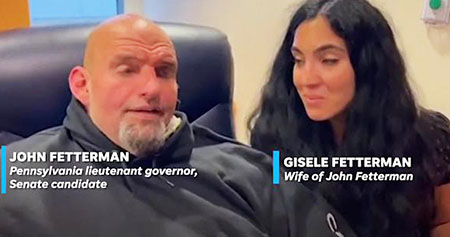 Republican gubernatorial hopeful Geoff Diehl is blasting a new hire by Attorney General Maura Healey’s campaign who identifies himself as an “Undoc DREAMer” on his social media profile, a charge the AG threw back at him as taking a page out of the “Trump playbook.”

“Maura Healey’s selection of a self-confessed undocumented immigrant to be her campaign’s deputy political director is unbelievable,” Diehl told the Herald.

“Massachusetts residents are worried about the Legislature giving driver’s licenses to illegal immigrants and are looking to elect a governor to stand in the way. All the while, our state’s chief law enforcement official is quite literally hiring an undocumented immigrant to help spearhead the ultra-liberal, progressive agenda she intends to bring into the Governor’s Office,” Diehl said.

A Boston Globe poll released May 1, right before the Massachusetts Senate overwhelmingly approved a bill to grant driver’s licenses to illegals, which had already passed the state House, blew up in the leftist paper’s face when it showed strong opposition to the measure even in the notoriously progressive Bay State:

The Globe was so perturbed by the findings that it devoted a second full-length article on May 2 to giving its spin on what the poll results truly meant.

Meanwhile, in Pennsylvania, progressive Lt. Gov. John Fetterman just secured the Democratic nomination for a U.S. Senate seat. His wife first entered the U.S. as an illegal alien. Fetterman, on his official campaign website, specifically heralds her as a “trailblazer” for this:

Gisele Barreto Fetterman, the Second Lady of Pennsylvania (or as she prefers, “SLOP”) is a trailblazer in her own right. Born in Rio de Janeiro, Brazil, Gisele’s mother took her and her younger brother to the United States when she was seven, all of them undocumented immigrants. They lived in a one-room apartment in New York City and were teaching themselves English while her mother worked cleaning hotels and houses. After 15 years of living in the shadows, Gisele received her green card in 2004 and became a United States citizen in 2009.

Mrs. Fetterman uses her position as “second lady” to support illegals in America:

Pennsylvania, your second lady is a formerly undocumented immigrant. ❤️Thank you.

As someone who was one of “those people” and who grew up as an undocumented child, I can only imagine what my outcome would have been had school board members actively been rooting against my success. Good people of Oxford, please run for school board. https://t.co/f7YvlAPhB3

We repeat: The lieutenant governor of Pennsylvania and Democrat nominee to become a United States senator is “proud” that his wife’s family broke the immigration laws of this nation:

Immigration is personal for me. @giselefetterman lived in America undocumented for years after fleeing violence in Brazil when she was 7.

I wouldn’t have a family if it weren’t for immigration. It's what makes America, America. pic.twitter.com/wpA6FrSFhK

It’s not being hidden anymore. American elected officials are openly working to harm the citizens of this nation on border security.

Healey has been the attorney general in Massachusetts since January 2015. There is no gray area in her stance on the issue: she is committed to serving illegal aliens in her official government role.

From a news release she issued in 2017 on then-President Trump opposing counting illegals as part of the 2020 U.S. census:

Massachusetts Attorney General Maura Healey today joined a coalition of states, cities and counties in filing a lawsuit against the Trump Administration for attempting to illegally exclude every person from being counted when congressional districts are redrawn.

“The Trump Administration, fueled by its animus toward undocumented immigrants, is attempting to erase their existence in our census data, shift representation in Congress away from states with large immigrant populations, and bypass centuries of historic precedent,” AG Healey said. “In Massachusetts, we stand with our immigrant communities and we are taking this action today to ensure that everyone is counted, and everyone is represented in Congress.”

The Boston Globe reported in 2019 on Healey opposing charges being filed against a judge who deliberately prevented an illegal alien from being apprehended by U.S. Immigrations and Customs Enforcement officers:

“I want to give my full-throated endorsement of Mayor Kenney’s decision,” [Fetterman] said. “Any Democrat that doesn’t agree with this policy is pandering to xenophobia. Sanctuary cities ensure the safety and well-being of everybody.”

In 2018, he embraced the issue while serving as Democrat gubernatorial candidate and current Gov. Tom Wolf’s wingman:

In dodging the same question while running for re-election as Massachusetts attorney general in 2018, Healey made a point that sadly rings true. Start at 1:12 mark:

How do the candidates for the state's top law enforcement stand on sanctuary cities, immigration, and family separation at the border? @maura_healey and @jaymcmahonforAG respond: https://t.co/EMDsjihAb3 pic.twitter.com/db6B7xKE65

For three decades, institutional power in the United States has brutally punished the American people on a subject essential to the very integrity of this country, the value of citizenship. Things have now regressed to the point where illegal aliens are becoming official high-placed members of institutional political power. If the trajectory continues, it will mean the end of the United States as a sovereign nation.