If Supreme Court overturns Roe v Wade, 13 states have trigger laws to ban most or all abortions

Should the Supreme Court overturn Roe v. Wade, as a draft opinion leaked on Thursday indicates, 13 states have so-called “trigger laws” which would ban most or all abortions that would immediately take effect. 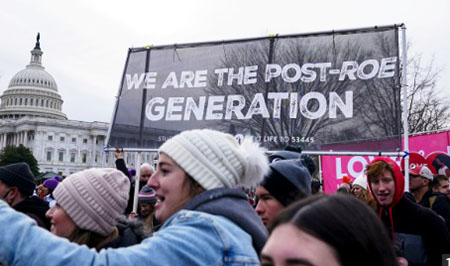 Five additional states – Alabama, Arizona, Michigan, West Virginia and Wisconsin – have an abortion ban still on the books from before Roe v. Wade that could be reinstated if the law is overturned, according to Guttmacher’s research.

Georgia, Iowa, Ohio and South Carolina all have laws banning abortions after the six-week mark which have been ruled unconstitutional but would likely be revisited if Roe is overturned, Guttmacher reported.

“If the draft opinion made public tonight is the final opinion of the court, we wholeheartedly applaud the decision. The American people have the right to act through their elected officials to debate and enact laws that protect unborn children and honor women,” Susan B. Anthony List President Marjorie Dannenfelser said in a press release Monday evening. “If Roe is indeed overturned, our job will be to build consensus for the strongest protections possible for unborn children and women in every legislature.

“We also recognize the need for the pro-life movement to continue its existing work to support pregnant women and children in need. There are thousands of pro-life pregnancy centers and maternity homes nationwide and an ever-growing pro-life safety net. The pro-life movement will continue to grow to meet the needs of these women and their families, walking and planning with them to love and serve both mother and child.”

Access to abortion is expected to continue in blue states like New York, which passed a bill in 2018 designed to codify Roe.

California Gov. Gavin Newsom tweeted: “We are proposing an amendment to enshrine the right to choose in the California constitution. We can’t trust SCOTUS to protect the right to abortion, so we’ll do it ourselves.”

13 states have trigger laws to ban most or all abortions, If Supreme Court overturns Roe v Wade, SCOTUS, WorldTribune.com

If Supreme Court overturns Roe v Wade, 13 states have trigger laws to ban most or all abortions added by Editor Two on May 3, 2022
View all posts by Editor Two →