Big-box hardware retail goliath Home Depot is taking a stand. It will not support those treasonous, traitorous Trumpian insurrectionists. How noble. How brave. But wait ’til you find out what Home Depot does want to back. It should help clarify things nicely.

Home Depot co-founder Ken Langone, a major Republican donor, drew widespread establishment media attention last month when he said he feels “betrayed” by former President Donald Trump’s denying the validity of the fraud-riddled process that installed Joe Biden in the White House and by the overhyped unrest on Capitol Hill on Jan. 6. 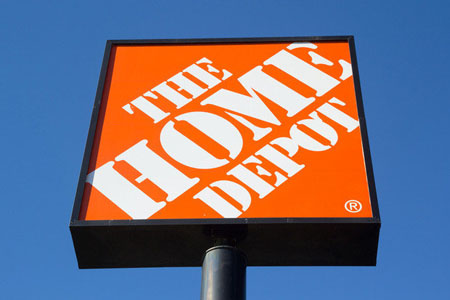 Sara Gorman, Home Depot Senior Director of Corporate Communications, on Jan. 27 declared the company was planning to cut off donations to GOP elected officials who supported Trump in questioning the validity of the Swamp Uniparty’s Nov. 3 coup (bold added throughout this column):

We are pausing to take time to carefully review and reevaluate each of the members who voted to object to the election results before considering further contributions to them. While the PAC is making contribution decisions on the next cycle, as always, it will evaluate future donations against a number of factors. Our PAC supports candidates on both sides of the aisle who champion pro-business, pro-retail positions that create jobs and economic growth.

We included that last limp sentence because it reveals the true nature of Home Depot’s alleged Republican leanings. Their “conservatism” is nothing more than the familiar “free-market” globalist racket that seeks open borders for cheap labor and unhindered trade with communist China so it can stock its aisles with crappy merchandise.

Check out this extremely disturbing video clip of Langone in 2013 gushing about how “wonderful” it is that you can find desperate Mexicans in any Home Depot parking lot pining for work like good conservative Americans should. This is a glorious sight to behold for out-of-touch billionaires like Langone: Day laborers piling into the back of pickup trucks to earn whatever they can with no hope of ever accruing benefits, pensions, health care coverage or paid vacation days.

OK, so now we know what Home Depot will NOT be funding. Let’s take a look at something they ARE funding: Virulent hatred of white people in the workplace.

The Home Depot Foundation is partnering with the Georgia Center for Nonprofits (GCN) to create a “Diversity, equity, and inclusiveness resources for nonprofits” resource hub.

The GCN website boldly splashes the initiative atop its home page with the Home Depot logo prominently featured:

Correcting systemic racism and unconscious bias requires every one of us, working together. Presented with The Home Depot Foundation, this hub will help you build your capacity for equity work. Get started now!

The material Home Depot is willingly attaching itself to in this guide can only be described as pure, undistilled racial animus against Caucasians.

Under the heading “Term and Concepts,” the hub links to an Annie E. Casey Foundation article titled “Equity vs. Equality and Other Racial Justice Definitions.”

In the patented Soviet style, this action item provides rigorous definitions to buttress its loaded narrative. Control the dialect and you control the argument. Among them are:

Structural racism (or structural racialization) is the racial bias across institutions and society. It describes the cumulative and compounding effects of an array of factors that systematically privilege white people and disadvantage people of color.

The hub also links to a “Glossary of racial equity terms” at the W.K. Kellogg Foundation. Definitions found here are so insanely radical that adults holding authority over children is cited as an example of “social group” “privilege”:

Those aspects of society that overtly and covertly attribute value and normality to white people and whiteness, and devalue, stereotype and label People of Color as “other,” different, less than or render them invisible.

Examples of these norms include defining white skin tones as nude or flesh colored, having future time orientation, emphasizing individualism as opposed to a more collective ideology, defining one form of English as standard and identifying only whites as the great writers or composers.

Examples of privilege might be: “I can walk around a department store without being followed.” “I can come to a meeting late and not have my lateness attributed to your race;” “being able to drive a car in any neighborhood without being perceived as being in the wrong place or looking for trouble.” “I can turn on the television or look to the front page and see people of my ethnic and racial background represented.” “I can take a job without having co-workers suspect that I got it because of my racial background.” “I can send my 16-year old out with his new driver’s license and not have to give him a lesson how to respond if police stop him.”

A Southern Poverty Law Center “Hate Map” is also a part of the resource trove. The ludicrous map smears “Radical Traditional Catholicism” groups such as The International Fatima Rosary Crusade, the pro-family conservative organization The Family Research Council under “anti-LGBTQ” and “Americans for Legal Immigration” under “anti-immigration.”

This is what Home Depot is a part of.

If you thought all that was bad enough, hold on to your hat. Things are about to get truly Maoist. The hub features an oppressive feature article titled “Moving Beyond Diversity Toward Racial Equity” in which Ben Hecht, President and CEO of an organization called Living Cities, lays out his vision of a normal workplace environment combatting racism:

So, to build a new, more inclusive culture, we first needed to be able to see the norms, values, and practices in our institutions that advantage white people and ways of working, to the exclusion and oppression of all others.

To do this, we had to commit time and resources to staff members’ individual learning. Understanding history, interrogating personal biases, building empathy and respect for others, getting comfortable with vulnerability — these skills require training and ongoing practice.

The 40-hour workweek is simply going to have to make time for all this:

This is dedicated, individual work that must be modeled from the top. To start, all staff, including myself, underwent multi-day anti-racism trainings to build a shared vocabulary, definitions and analysis to ground our group conversations. New staff members are now expected to take this training within 90 days of hire. A permanent, in-house team of staff (Colleagues Operationalizing Racial Equity, or CORE) are responsible for the deepening of this practice, on an ongoing basis, through trainings, Employee Resource Groups, all-staff conversations, coaching, and internal racial equity consultation for other teams.

Geez… When do they get any actual work done?

Laugh if you like, but Ben Hecht’s organization is tied in with some major players. Living Cities states that it is “a collaborative of the world’s largest foundations and financial institutions. We foster transformational relationships across sectors to connect those who are willing to do the hard work of closing racial income and wealth gaps.”

Ben currently is Chairman of Duke University’s Center for Advancement of Social Entrepreneurship (CASE) Advisory Council, and has served on the U.S. Impact Investing Task Force to the G7, on the StriveTogether Advisory Council, and as Finance Committee chair and Treasurer for the Georgetown Day School (GDS) board of trustees. He has been selected as one of the Top 100 City Innovators Worldwide in the area of Urban Policy and as a Rockefeller Foundation Bellagio Center Resident Fellow.

In addition to those names, Wells Fargo is listed as a “Member” of Living Cities.

The resource hub also includes an “Action Plan Examples” link to a Racial Equity Tools website that features this as a bold quote on its page:

“Because we live in a world shaped by legacies of brutal colonization, enslavement, and heteropatriarchy, we must assume that these power structures are always present in us and our relationships. Whether or not we have formal power, we can enact subtle and gross forms of anti-Blackness, white supremacy, sexism, homophobia, transphobia, ableism, classism, and other structural oppressions. When we avoid conflict or move through it carelessly, we end up acting out and reinforcing micro versions of oppressive structural patterns unconsciously, even if we are from an identity harmed by those systems. This can end relationships, sidetrack organizations, and undermine social movements.”

A “Training and Popular Education” link to the same site includes these topics:

It should be increasingly clear to those who have eyes willing to see that for our modern-day Bolsheviks “white people” are the kulaks that must be wiped out if the Revolution is to succeed.

While it may seem strange to some that corporate giants like Home Depot are funding the dehumanization of America’s kulaks when the Soviets used the term “capitalist exploiter” to crush its property-owning peasants, this is largely due to lingering misperceptions that globalist plutocrats ever really sought genuine free markets to cultivate a thriving middle class. A middle class in 2021 America stands in the way of monopolistic market dominance, of reducing labor to option-deprived serfdom and of the establishment of a faceless, soulless, compliant and controlled universal global customer base.

If you recognize this facet of corporate globalism, you will immediately understand why a company like Home Depot would be working to dehumanize white people in America as it is demonstrably doing here.