Here are the questions Nancy Pelosi refuses to answer about her role on Jan. 6

A Republican member of the House Administration Committee on Tuesday reminded House Speaker Nancy Pelosi of key questions about the events of Jan. 6 at the U.S. Capitol that she continues to refuse to answer.

During a hearing of the House select committee investigating Jan. 6, Illinois Republican Rep. Rodney Davis reminded Pelosi a letter he and three colleagues sent to her in February. 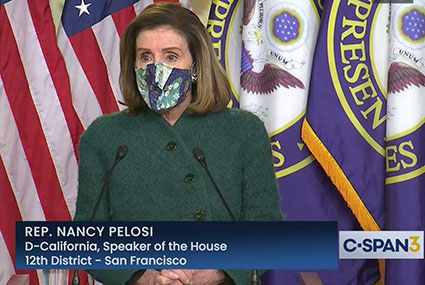 The three GOP colleagues — Rep. James Comer of Kentucky, Rep. Jim Jordan of Ohio, and Rep. Devin Nunes of California — are, respectively, the ranking minority members of the House Committee on Oversight and Reform, House Judiciary Committee, and the House Select Committee on Intelligence.

“A number of questions from that day still remain unanswered. I’m still waiting on the Speaker of the House to answer a letter I sent her back in February that asks why the National Guard requests by the then-[USCP] police chief were denied, why the Speaker was involved in eventually approving the request, why the House SAA [Sergeant at Arms] has refused to comply with preservation and production requests from my office.

“With these questions still unanswered and another purely political contempt resolution on the floor today, it makes you ask yourself: What is the majority hiding and why are their priorities not the men and women serving in the Capitol Police and making this Capitol more secure for everyone? We need these reforms and they should have been done months ago.”

Here are the questions Davis, Jordan, Comer and Nunes posed to Pelosi in February and which she has never answered in public and under oath:

• When then-USCP Chief Steven Sund made a request for national guard support on January 4th, why was that request denied?

• Did Sergeant at Arms Paul Irving get permission or instruction from your staff on January 4th prior to denying Chief Sund’s request for the national guard?

• What conversations and what guidance did you and your staff give the Sergeant at Arms leading up to January 6th specific to the security posture of the campus?

• What conversations did you have during the attack on the Capitol and what response did you give security officials on January 6th when Chief Sund requested National Guard support that required your approval?

• Why are your House Officers refusing to comply with preservation and production requests to turn over requested materials relevant to the events of January 6th?

President Donald Trump offered the National Guard to Capitol authorities on Jan. 5. The U.S. Capitol Police requested the Guard in the early afternoon of Jan. 6, but that help didn’t arrive until later in the day.

“The select committee is nothing more than Pelosi’s illegal creation. It’s an oppressive, medieval Star Chamber using the threat of prison, media misinformation, and bankruptcy to force individuals to submit to and support Pelosi’s hyper-partisan narrative about what happened on January 6,” PJ Media’s Mark Tapscott noted.

Here are the questions Nancy Pelosi refuses to answer about her role on Jan. 6, Jan. 6 inquisition, U.S. Capitol, WorldTribune.com

Here are the questions Nancy Pelosi refuses to answer about her role on Jan. 6 added by Editor Two on December 16, 2021
View all posts by Editor Two →