The satire site Babylon Bee is refusing to back down after Twitter blocked its account having failed to see the humor in naming transgender Biden administration official Rachel Levine its first annual Man of the Year. 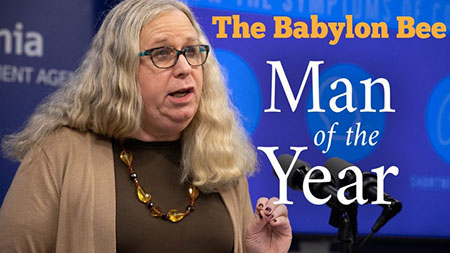 The Bee’s satirical piece on Levine came shortly after USA Today, in an article that was not labeled as satire, named the Health and Human Services assistant secretary one of its “Women of the Year.”

Related: Biological male Rachel Levine is one of USA Today’s ‘Women of the Year’, March 15, 2022

The Bee said it would give up its account, which has 1.3 million followers, before erasing the tweet.

“We’re not deleting anything,” said the Bee. “Truth is not hate speech. If the cost of telling the truth is the loss of our Twitter account, then so be it.”

Levine, formerly Richard, is a biological male who “transitioned” to female in 2011 at the age of 53.

Twitter does not take kindly to anyone who refers to Levine as a man.

Indiana Republican Rep. Jim Banks was suspended in October for a tweet saying “The title of first female four-star officer gets taken by a man,” referring to Levine’s promotion to four-star admiral in the U.S. Public Health Service Commissioned Corps.

Georgia Republican Rep. Marjorie Taylor Greene was slapped with a warning for tweeting, “a dude who lived the first 50 years of his life as a man isn’t the first female anything.”

The Bee wrote in its March 15 send-up of Levine:

Levine is the U.S. assistant secretary for health for the U.S. Department of Health and Human Services, where he serves proudly as the first man in that position to dress like a western cultural stereotype of a woman. He is also an admiral in the U.S. Public Health Service Commissioned Corps. What a boss!

Rachel’s original name is Richard Levine, but he changed it to Rachel for some strange reason a few years ago. Who cares? Who says a dude as accomplished as this can’t be named “Rachel?”