3M has become one of the most reviled companies in America in recent days in lieu of reports that the Minnesota-based corporation has been selling protective face masks that it produces to foreign nations over U.S. health buyers in pursuit of greater profit.

“For the last several weeks, we have had a boiler room chasing down 3M authorized distributors [and] brokers supposedly representing that they sell the N95 masks, only get to warehouses that are completely empty,” Jared Moskowitz, head of Florida’s Division of Emergency Management, told Fox News host Tucker Carlson on April 2. “[We are] being told that our shipments are on cargo planes and the flights don’t even appear…. We’re chasing ghosts. I just decided to turn up the heat and tell people what is actually happening in the N95 mask space.” 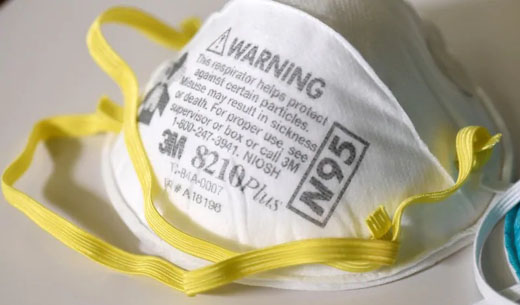 “[T]he idea that an American company is selling masks away from our hospitals, away from our doctors, away from the real heroes on the front lines is… really criminal,” Moskowitz continued.

An angry President Trump declared that he would invoke the Defense Production Act to assure that the Minnesota-based company act to meet U.S. health officials’ needs first. “We hit 3M hard today after seeing what they were doing with their Masks. ‘P Act’ all the way. Big surprise to many in government as to what they were doing – will have a big price to pay!” Trump tweeted out about the company.

When most people hear the name 3M, they probably think of Scotch Tape or maybe Post-In Notes, two products the corporation is best known for. But in fact 3M is a widely diversified company, and manufacturers parts and products “for the electronics, health, safety, security and transportation industries – earning it a position as a bellwether for the U.S. economy due to its diverse portfolio,” as the trade publication IndustryWeek puts it.

As such, 3M is highly engaged throughout the world, and very much a force in advancing the increased globalism in the corporate world today. It should be no surprise for regular readers of this column then to discover that 3M is also one of the more “woke” corporations out there as well, having indulged in politically correct hostility toward the Trump administration in the past and continually helping to advance the usual facets of the progressive “diversity” buffet, including determined support for the Third World invasion of America and the West.

In August 2017, the head of 3M very noisily left Trump’s Manufacturing Advisory Council in a PR move meant to telegraph the company’s opposition to “white supremacy” just as a big-box media pile-on was underway feverishly accusing Trump of supporting the notorious protesters in Charlottesville, Virginia.

A George Soros-backed organization known as Business For Responsibility claimed victory over 3M’s decision. BSR, which we profiled in October, wrote a playbook detailing why global companies must dedicate themselves to social activism and showing them how to avoid losing customers as they do so. Inge Thulin, the then-CEO of 3M who resigned from Trump’s advisory council, was prominently quoted in the section of this playbook highlighting “successful policy engagement.”

“Sustainability, diversity and inclusion are my personal values and also fundamental to the 3M Vision,” a preening Thulin said of the anti-Trump posturing. “The past few months have provided me with an opportunity to reflect upon my commitment to these values.”

BSR has every reason to be pleased with 3M as a globalist company. The corporation is listed as a “generous supporter” to the Clinton Foundation ($50,000-$100,000 range) and has financially backed the Atlantic Council, a globalist think tank that played a crucial role in the Deep State impeachment coup of Trump over the Ukraine.

3M also enthusiastically supports prominent efforts to bring Third World refugees into the U.S. The company is a corporate partner of the Hebrew Immigrant Aid Society, or HIAS, a Jewish non-profit organization that plays a pivotal role in furthering the refugee inundation of our nation. “HIAS’ U.S. legal program seeks to safeguard and increase the rights of asylum seekers upon their arrival in the U.S. and throughout their journey to citizenship,” the organization states. “Our U.S. legal team provides pro bono representation in deportation proceedings and in obtaining humanitarian visas and asylum, while also providing holistic support to our clients through wraparound services.”

3M is also a partner of the International Refugee Assistance Project, whose name speaks for itself. IRAP was started as a well-funded plank of the radical Urban Justice Center. We profiled this group in November. When not committed to increasing the refugee floodtide into America and fighting attempts to secure our porous southern border, the Center strives to legalize sex work and fight the “fascism” its says is endemic within the Trump administration. IRAP is touted as one of its major social justice spin-off success stories.

One of 3M’s top executives is a key board member of an organization so extreme that it openly vows to protect the “rights” of criminal illegal aliens to enter and stay in the U.S. Ivan Fong is Senior Vice President, Legal Affairs and General Counsel, for 3M. He is also Chair of the Board of Directors for a group called Equal Justice Works.

A 2017 post on its website titled “8 Things to Know about DACA,” written by Equal Justice Works “2015 fellow” Laura Flores-Dixit of the California Rural Legal Assistance Foundation, is a real eye-opener. Here’s an excerpt:

“We must #DefendDACA. DACA holders are important continuants who can and have demanded that elected officials hear their concerns…. With a spotlight on DACA, there is an opportunity to demand protection not only for DACA holders, but for all immigrants. We must remember that DACA holders are not political pawns to be negotiated with, and that it is time to move beyond the good immigrant/bad immigrant dichotomy, recognizing the contribution of all immigrants to American society, regardless of their academic, criminal, or immigration history.”

Regardless of criminal history! Is it any surprise that a globalist corporation with senior executives aligning themselves with this kind of agenda would not care a whit for the lives of everyday Americans during a global health pandemic?