Showing complete and utter disdain for any negative public relations fallout whatsoever, leading corporate brands have partnered with an ultra-radical organization that features a strident commitment to flooding America and Europe with Third World refugees and promoting the rights of “sex workers” via legalized prostitution.

In researching the Corporate Watch beat, it never ceases to amaze to see the levels of sheer extremism and outright moral degeneracy that our so-called elites willingly associate with in the name of social justice and “philanthropy.” Corporations and prominent business leaders are only too happy to directly tie themselves to controversial agendas that would have been unthinkable from a brand-protection standpoint a mere 20 years or so ago. 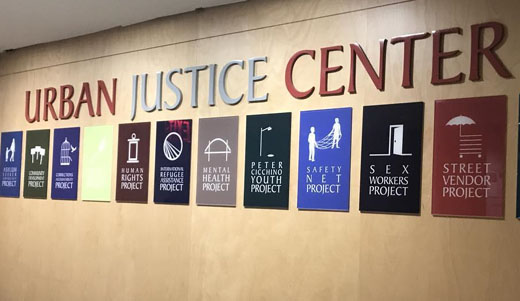 One such face in the modern radical progressive assault on Western Civilization is an organization called the Urban Justice Center.

Founded in 1984 to be an anti-poverty and minority rights outfit, the attorney-driven center has gained attention in recent years for two jarring leftist endeavors. The International Refugee Assistance Project (IRAP) is a well-funded plank of the Center that boasts the backing of influential board and advisory board members such as HBO talk show host John Oliver, former Obama United Nations Ambassador Samantha Power and ultra-connected moneyed globalist elitist Robert J. Abernethy.

IRAP is a fierce opponent of the Trump administration’s efforts to reduce the number of Third World refugees pouring into the United States and any effort to secure our porous southern border. More on this group in a moment.

Joining these leading lights within the UJC family is a “longtime human rights lawyer, organizer, and educator” who also happens to be, as his official Center bio states, a “go-go dancer and performer in the adult film industry.” RJ Thompson is Managing Director of the Center’s Sex Workers Project.

Surprisingly or not, the Sex Workers Project is a strong advocate of massive unchecked Third World immigration into the U.S. The language it uses to describe this support reeks of boilerplate communist verbiage. A 2018 SWP official statement on “migrant rights” reads:

“We know that war, civil and economic strife, and environmental degradation, often having root causes based in the militarist, capitalist and imperialist policies of Global North countries including the United States, force people to leave home countries. We declare that migrant rights are human rights and that all migrants and our families are entitled to humane treatment and the full spectrum of our civil, political, economic, social, cultural, environmental and sexual rights.”

If that isn’t radical enough for you, the UJC’s Executive Director spells out the Center’s revolutionary stylings at the top of its 2018 Annual Report. In a homey “Note From Doug,” UJC chief Doug Lasdon pledges his organization’s devotion to the fight against Trump-era “fascism”:

“I won’t sugarcoat it — I believe our democracy is endangered,” Lasdon writes.

“New regimes of cruelty are tearing families apart at our borders, while the old signs of fascism have gained new life in streets and statehouses around our great country. But in the face of these terrible forces, new forms of resistance are blossoming, and the Urban Justice Center is dedicated to helping them grow.”

Fighting fascism in America apparently means empowering prostitutes to better ply their wares without fear of arrest. A key center objective is passing legislation in the state of New York to prevent the possession of condoms by streetwalkers from being used as “evidence that people are engaging or intending to engage in prostitution.”

Far more depressing is the Sex Workers Project’s dedication to securing the child-raising rights of active prostitutes. A 2018 article at the radical progressive website In These Times bears the blunt headline, “The Right to Mother and Do Sex Work.” The subhead deplores the fact that, “In custody battles, sex workers face trial by slut-shaming.”

At the heart of the battle to protect prostitute mothers one can find the attorneys of the Urban Justice Center. “Parents, particularly mothers, who are involved in sex work often have it used against them to separate them from their child,” Sex Workers Project counselor Liz Afton is quoted as saying in the article. “In many cases, we see the inherent biases of the judge at play, perhaps not explicitly, but in their demeanor and rulings,” Atossa Movahedi, director of legal services and development at the Center’s domestic violence project, asserts in a tone of outrage.

An active “sex worker” and mother of an 8-year-old daughter expresses relief that “I had a good judge. He felt what I did for a living had no bearing on my ability to parent.” But, Kymberly Cutter states, she realizes that, “I was really, really lucky. If you get a conservative judge who wants to punish women, well, you’re in big trouble.”

Not so lucky is her young child, who will be exposed to a nightmarish life-threatening lifestyle that will surely warp her development in a profound way.

This is the work that the Urban Justice Center advances. One would think leading corporate brands would distance themselves as far as humanly possible from any association with such an extreme agenda. One would think wrong. Among companies listed as financial donors to the Center in the 2018 annual report are leading financial and insurance conglomerate AIG, Airbnb, the Capital One Foundation, the philanthropic arm of General Electric the GE Foundation, the Levi Strauss Foundation and Merrill Lynch.

In the group’s 2017 annual report, the George Lucas Family Foundation, the charity arm of the creator of Star Wars, is listed as donating between $250,000 and $999,000 to the radical organization. Yes, the man who gave the world the morality tale of Luke Skywalker and Darth Vader is heavily committed to financially supporting an organization that seeks to advance the right of prostitutes to raise young children.

Also standing side by side with go-go dancer and adult film performer Thompson is Robert J. Abernethy. The wildly successful entrepreneur is a board member of the Center’s aforementioned International Refugee Assistance Project plank. His bio checks off a dizzying array of global elitist boxes.

Abernethy “serves on the executive committee and as Vice Chairman of the Atlantic Council and the Pacific Council on International Policy as well as a member of the chairman’s forum of the Council on Foreign Relations,” the bio reads. “He is a board member of the Albert Schweitzer Fellowship [and] the Brookings Institution.”

IRAP maintains a particularly ferocious legal assault on any attempts to check the flow of Third World refugees into America and Europe. “In Greece, we are engaging in capacity-building work with local organizations providing legal assistance to refugees stranded there, with the goal of developing a network of lawyers in Europe to create broad international change in the field of refugee legal aid,” a “2019 Report to Supporters” states.

The group is even more active on our beleaguered Mexican border.

“We are responding to the humanitarian crisis at the U.S. southern border by challenging new policies in court that aim to restrict the rights of those arriving there,” the report to supporters boasts. “Our litigation team has recently filed its first lawsuit against the Trump Administration’s attacks on the right to seek asylum, and we are exploring new ways to extend our model to leverage pro bono legal volunteers from nearly 100 of our partnering law firms to assist asylum seekers in detention.”

Under the “Our Model” section of IRAP’s website, the group declares that its strategy involves utilizing an “army” of lawyers and legal staffers to push refugees into the West:

“IRAP has created a ‘virtual public interest law firm’ – a firm that is not impeded by geographic boundaries and uses technological solutions to deliver free high-quality representation to people living in, and fleeing from, war, persecution, and political upheaval around the world. We have trained an army of volunteers – 1,200 students from 30 law schools in the United States and Canada and pro bono attorneys from over 120 international law firms and multinational corporations – to assist thousands of refugees and displaced people on urgent registration, protection, and resettlement cases.”

This is nothing short of an organized litigation assault on the safety and well being of American citizens and their communities.

The plan is to present an unceasing opposition to Trump administration efforts to protect Americans from exposure to refugees hailing from among the worst terrorist-infected hotspots on the globe. “Together, we continue to utilize every tool — through the courts, through civic action and protest, through our contacts with allies on both sides of the aisle, through the media, and through a self-organized volunteer network — to work tirelessly to deliver legal solutions for the world’s most vulnerable refugees,” IRAP proudly declares of its fight to thwart President Trump’s Travel Ban on Muslims from known terror countries.

The 2019 Report to Supporters reveals that this destructive plank of the extremist Urban Justice Center is aided by the direct support of “corporate partners” including 3M, AIG, General Electric, J.P. Morgan Chase & Co., Microsoft and Rosetta Stone.

The focused efforts of the fighters against “fascism” at the Urban Justice Center are a telling window into the use of massive immigration and moral degeneration as active ingredients in the toxic recipe to destroy the United States. A nauseatingly common feature of this hateful agenda is the gleeful support of well-known corporations and leading names in entertainment, politics and the financial halls of power.