Agitators, rabble-rousers and assorted celebrities on the Left are organizing an unprecedented “resistance” movement against Donald Trump’s presidency.

“When he takes office Jan. 20, Mr. Trump will be facing some of the most virulent opposition ever to confront a new president,” Janet Hook wrote for The Wall Street Journal on Jan. 10. 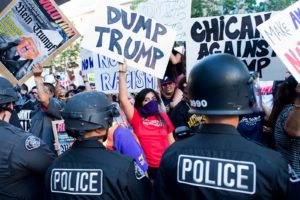 “Neither Mr. Obama nor Mr. Bush saw their first days shadowed by the sorts of organized protests that are expected to assemble against Mr. Trump.”

Those on the front-lines of the so-called resistance include:

Mark Meckler, a conservative activist involved in the founding of the tea party movement, said Trump’s foes are attempting to delegitimize his presidency, not just oppose his policies.

“It’s disgusting, and is only serving to solidify the support that Trump and Republicans have garnered,” he said.

Meanwhile, others have responded to Trump’s stunning victory by jumping into the political fray for the first time.

Amanda Crabb, a college professor in Quincy, Mass., is one of many new participants in a candidate-training webinar with VoteRunLead, a nonpartisan group that encourages women to run for office.

Crabb had considered running for a post on the local school committee in 2015, but backed down in part because she lacked confidence in her qualifications, she told the Wall Street Journal. After Trump’s win, Crabb said she is feeling emboldened to step out.

“It’s hard for me to see him in office,” she said. “He stands for so many things I don’t stand for.”

Erin Vilardi, head of VoteRunLead, told the Journal that the group has seen a surge of interest in their webinar candidate training sessions: 1,100 women signed up for the December training; another 1,200 participated in another earlier this month.

“Looking at Trump, women are saying, ‘What am I waiting for? If that guy can do it, I can,’ ” Vilardi said.