States which relied heavily on ballot drop boxes in the 2020 election should audit the surveillance video tapes that were installed at the drop box locations, a Georgia state senator said.

“All those drop boxes that were sent throughout Metro Atlanta, you can’t police them if you wanted to, so it just made it ripe for bad actors to game the system,” Republican state Sen. Burt Jones told Just the News in an interview this week. 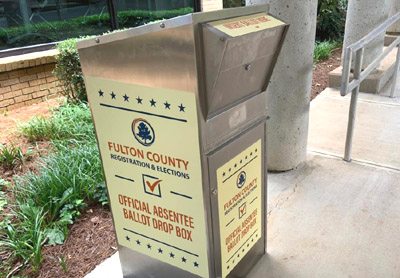 In Georgia, the use of drop boxes in 2020 was not approved by the Legislature but instead implemented in a consent decree and settlement between state officials and Democratic voter mobilization activists like Stacey Abrams. They were placed at scores of locations across the state, most heavily in the blue areas around Atlanta. The agreement required surveillance cameras record and monitor the boxes.

WorldTribune.com reported on Sept. 3 on a document from True The Vote which said video from the drop box locations shows “ballot traffickers” dumping tens of thousands of ballots into the boxes in Georgia and Arizona.

The Georgia Bureau of Investigation recently disclosed in a letter that it declined to investigate or audit concerns about possible misuse of drop boxes, claiming there wasn’t enough evidence to warrant such an action.

Jones, who is seeking his party’s nomination for lieutenant governor next year, said he believes the camera footage should be checked from the November 2020 General Election 2020 and the January2021 Senate runoff in his state, and that such audits should become part of future election integrity measures.

“Yes, they should have been audited, the video surveillance cameras,” Jones told the John Solomon Reports podcast.

Solomon noted that “some experts have raised concerns drop boxes could be used to carry out illegal ballot trafficking, where party operatives collect ballots from reluctant or low-propensity voters and deliver them in bunches. Such a tactic, known as harvesting, is outlawed in most states, including Georgia.”

The Georgia Legislature this year, as part of its election integrity bill which outraged the Left, scaled back the use of drop boxes in future elections, requiring they only be used at official voting locations and not in random neighborhoods.

“There are some things I think we can tweak to make it better, to make it easier to vote, and obviously harder to cheat and make it where you can police it better,” Jones said.