A new Gallup poll found that Democrats now have a more favorable view of socialism than they do of capitalism. 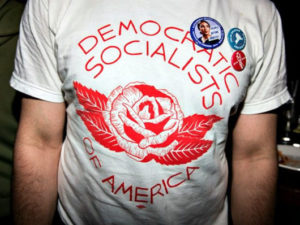 The poll found that 57 percent of Democrats have a positive view of socialism, while 47 percent maintain a favorable view of capitalism.

It was the first time in Gallup’s polling over the past decade in which Democrats said they had a more positive image of socialism than they do of capitalism.

“Views of socialism among Democrats and Democratic-leaning independents are particularly important in the current political environment because many observers have claimed the Democratic Party is turning in more of a socialist direction,” Gallup said in releasing its findings.

“It’s possible that the drop in Democrats’ positive views of capitalism is related to Donald Trump’s presidency,” Gallup said.

“Trump is an enthusiastic capitalist, and his administration’s efforts to roll back regulations on business and industry, as well as the tax cut law that is advantageous to businesses and corporations, may have caused Democrats to view the entire capitalist enterprise with less positive eyes.”

Gallup added that “The talk about the Democratic Party moving more toward socialist policies in its platforms in this year’s midterm elections was muted with the failure of several socialist candidates to capture their party’s nomination in recent primary voting. And, although a majority – even if not an overwhelming one – of Democrats nationwide react positively to the word ‘socialism,’ the strong antipathy toward socialism among Republicans and Republican-leaning independents suggests a political campaign favorable to socialism would not play well in a general election.”