Elon Musk has for now abandoned the Democrat Party and will be voting Republican, he said.

“In the past I voted Democrat, because they were (mostly) the kindness party,” the Tesla CEO and prospective Twitter owner tweeted on Wednesday.

“But they have become the party of division & hate, so I can no longer support them and will vote Republican. Now, watch their dirty tricks campaign against me unfold …”

As predicted, a series of media attacks on Elon Musk were underway almost immediately.

On a livestream for the “All-In” podcast on Monday, Musk told the hosts that “the reality is that Twitter at this point has a very far-left bias,” adding that he classifies himself as a moderate, “neither Republican nor Democrat,” and has overwhelmingly voted Democrat.

“I might never have voted for a Republican, just to be clear,” Musk continued. “Now this election, I will.”

Musk said he has repeatedly become the target of attacks from the Left. 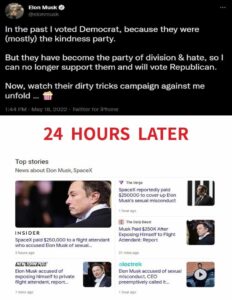 “Political attacks on me will escalate dramatically in coming months,” Musk wrote again on Wednesday.

Since announcing his intention to purchase Twitter and turn into a free speech platform and after he said last month that “the real president is whoever controls the teleprompter,” the Left has released its media attack hounds to frame Musk as a racist and sexist.

Musk had acknowledged in an April 27 tweet that attacks on him were “coming thick and fast” but were primarily “from the Left, which is no surprise.”

Former President Donald Trump noted in a Telegram post: “Tesla CEO Elon Musk has stepped up his criticism of the Democratic Party, labeling it the party of ‘division’ and ‘hate.’ ”

Tesla this week was removed from a key stock index, S&P 500 ESG Index, which tracks the performance of companies based on environmental, social, and governance (ESG) criteria. S&P Global Ratings cited issues including racial discrimination claims and poor working conditions at Tesla’s Fremont factory as the rationale for the exclusion.

“It has been weaponized by phony social justice warriors,” Musk tweeted about the decision.

Former Democrat voter Elon Musk turns on ‘party of division and hate’ added by Editor Two on May 20, 2022
View all posts by Editor Two →