The family of a 13-year-old Florida middle school student has filed a federal lawsuit against the School Board of Leon County after the school allegedly attempted to convince the girl to transition to a “transgender male” without informing the girl’s parents.

January Littlejohn, the girl’s mother, said that the school, Deer Lake Middle School outside of Tallahassee, had asked the girl which bathroom she wanted to use, which the lawsuit says she thought was “funny.” 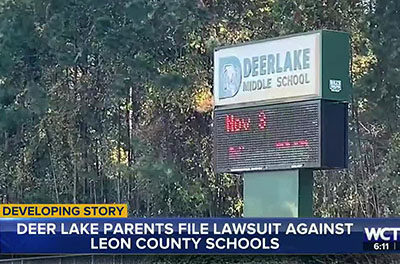 That was the first time she became aware that the school was meeting with her daughter and assisting the teenager in embracing a different gender identity in school settings, Littlejohn told the Washington Examiner in a report published on Nov. 12

“So when our daughter told us she was experiencing stress about her gender at the height of the pandemic we were completely caught by surprise. She had expressed no signs of gender confusion or distress in early childhood or leading up into this announcement,” Littlejohn said.

“So we were trying our best to navigate these unchartered waters and support her in the best way we could and help her through her feelings,” Littlejohn said. “We found a counselor, and started our own research which led us to gender ideology.”

According to the lawsuit, when the Littlejohns learned the truth about what the school did, they were shocked and outraged.

The lawsuit says that the school district was relying upon the LCS Lesbian, Gay, Bisexual, Transgender, Gender Nonconforming and Questioning Support Guide, which expressly directs school administrators to avoid notifying the child’s parents about a child’s gender identity, claiming such an action could lead to the student becoming homeless.

The Littlejohns’ attorney, Vernadette Broyles of a nonprofit law firm called the Child and Parental Rights Campaign, said “what the school district did is tantamount to saying children need to be protected from their parents, rather than by their parents. This guidance that they had in place and their actions convey the message that parents are presumed to be dangerous to their children. That is an extremely disturbing message to any parent, regardless of their views, beliefs, backgrounds and is certainly not the law in the state of Florida.”

Littlejohn spoke at a gathering of the Florida Family Policy Council about the school withholding from her and her husband what it did without their knowledge or permission: