Democrat policies, particularly the passage of the $1.9 trillion Covid stimulus bill, are to blame for the current record-setting inflation, FedEx founder and CEO Fred Smith said.

The consumer price index surged 8.5 percent in March compared to a year ago, up from 7.9 percent in February. The rate was the highest since December 1981. 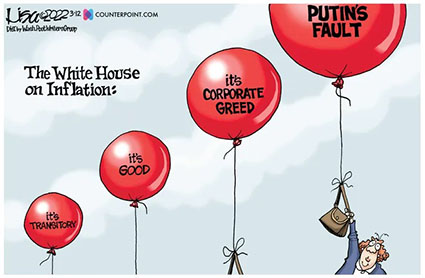 Smith noted that it was Larry Summers, Clinton administration treasury secretary, who called the Democrat Party’s and Team Biden’s stimulus plan “the least responsible macroeconomic policy we’ve had in the last 40 years.”

An example comes from Smith’s own company, FedEx, he said: “We know from our own statistics and can track exactly when the stimulus checks went out in April and May of last year, and we had about 50,000 [job] applications the first week in May. “It took us to December to get back to about 120,000 applications. So it’s simply quantitative data. I’m not saying anything based on anybody’s politics. It’s just the numbers.”

In a recent interview with the Wall Street Journal, Smith said much of the supply-chain crisis was created by government payments incentivizing people not to work.

The Foundation for Government Accountability calculated last summer that when the enhanced unemployment payments and monthly child tax credits being sent at the time were added to existing benefits for lower-income Americans, that worked out to about $3,700 per month for a two-child family, or $44,300 per year in payments.

During this period, Smith told the Journal, “We were 40,000 package-handlers short, and there were people in the media saying that the stimulus checks didn’t have anything to do with that.” Such people are “divorced from the world we’re living in.”

“If I’m getting a government check,” he said, there’s less incentive to “go into a warehouse.”

The U.S. dodged a major hyperinflation bullet last fall when the Democrats’ Build Back Better legislation, which some estimated would cost $5 trillion over ten years, fell short, Smith said.