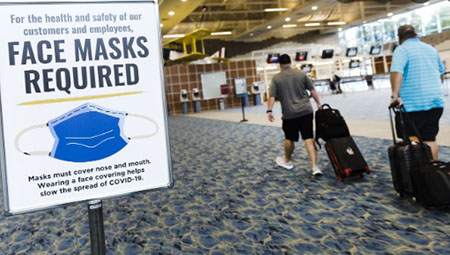 The Florida judge said that Team Biden’s mask mandate on public transportation including airports and transit hubs is “unlawful” because it exceeded the CDC’s authority.

“The Court concludes that the Mask Mandate exceeds the CDC’s statutory authority and violates the procedures required for agency rulemaking under the [Administrative Procedure Act],” Judge Mizelle stated in her ruling.

“The Court DECLARES UNLAWFUL and VACATES the Mask Mandate, remanding it to the CDC for further proceedings consistent with this order,” Mizelle added.

According to reports, it was not clear if the mandate would be immediately lifted.

The Florida lawsuit was filed by a group called the Health Freedom Defense Fund in July 2021.

“The Court directs the Clerk to TERMINATE President Joseph R. Biden, Jr., as a Defendant to this action, to ENTER final judgment in favor of Plaintiffs as prescribed in this order, and to CLOSE this case,” Mizelle concluded.

The mandate had been extended until May 3 by Team Biden.