Christmas is approaching and European superstate apparatchiks are exposing their loathing for the roots and customs of the traditional peoples of the Continent. 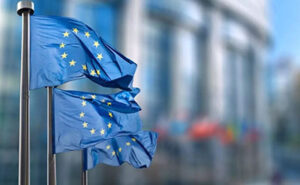 The tolerance-loving Cultural Left has no problem slinking down into the gutter to deeply offend Christians and Christianity:

Let me introduce you the #LGBTQ ambassador of the European Parliament.

How else could the famously tolerant and respectful rainbow community celebrate advent if not with a blasphemous, pointless provocation?

Share this & use #RespectAdvent to call for Simonetti’s resignation. pic.twitter.com/2PFcdVJqvl

Behind the easy outrage there lies a larger agenda.

As The European Parliament embraces rank anti-Christian hatred, the European Commission would like to cancel Christmas altogether and totally de-emphasize Christianity in Europe:

The European Commission was forced to perform a U-turn Tuesday [Nov. 30] after its guide to internal communication was accused of trying to cancel Christmas and launching an attack on “common sense.”

The 30-page guide on how to use more gender-neutral, LGBTQ+ friendly language in the Commission was unveiled by the equality commissioner, Helena Dalli, in late October….

The most controversial part of the advice was to “avoid assuming that everyone is Christian.”

“Not everyone celebrates the Christian holidays, and not all Christians celebrate them on the same dates,” says the document. It advises staff to avoid sentences such as “Christmas time can be stressful” and instead use “Holiday times can be stressful.”

It also says not to use the phrase “Christian names” and to use “first name” or “forename” instead as well as not using names “that are typically from one religion.” It gives the example of using “Malika and Julio” instead of “Maria and John” to describe an “international couple.”

The document is truly nutty:

As @giubileif uncovered @EU_Commission fully embrace cancel culture. An internal guideline by @helenadalli instructs that official communication shall avoid using Christian names, the word Christmas or ‘Colonisation of Mars’. Many more you can find below! https://t.co/mzHqqn3Q8k pic.twitter.com/b5Ckqw0j3X

Even during its backtrack after facing widespread blistering criticism, the Commission still stressed the higher aim of furthering the new Diverse Europe:

My initiative… was intended to illustrate the diversity of European culture and showcase the inclusive nature of the European Commission towards all walks of life and beliefs of European citizens.

Concern was raised with regards to some examples provided in the Guidelines on Inclusive Communication, which as is customary with such guidelines, is work in progress. We are looking into these concerns with the view of addressing them in an updated version of the guidelines. pic.twitter.com/90ZK8rpPb2

A burning contempt for the values of traditional Europeans is a character trait of the European superstate ruling establishment bureaucrat.

On Nov. 25, numerous high-ranking European Commission officials embarrassingly recited text from the radical feminist  “The Vagina Monologues” – a play that celebrates lesbian statutory rape – to denounce sexual violence against women. The tiresome, stale and cliched effort represents nothing more than another effort to foment strife and division.

Browse through and gaze at the faces of these soulless automatons as they blandly recite their ultra-incendiary lines.

Stooping to offend, alienate and disrupt harmonious society is a permanent feature of the pampered oligarchy:

We are over it.

On the International Day for the Elimination of Violence against Women, our Commissioners join their voices to echo their stories.

Violence against women has no place in the EU.

📽️ From the "The Vagina Monologues" by Eve Ensler.#SayNoStopVAW #OrangeTheWorld pic.twitter.com/NT9fCpCnrS

EU war on Christmas exposes seething elitist cultural hostility to those it would rule over, European Commission, WorldTribune.com