The targeted invasion of cities and towns throughout the U.S. by the forces of “diversity” and “inclusion” utilizing waves of refugees and ever-increasing massive immigration – both legal and illegal – has dramatically changed this nation in the first two decades of this century.

One city that exemplifies this stated push for a “New America” is Erie, Pennsylvania. The cast of characters involved includes all the familiar leading figures in the globalist cabal – George Soros, leftist activist groups and big business executives. 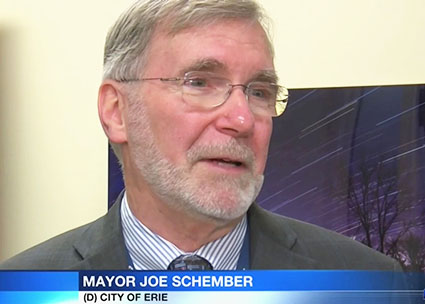 The City of Erie will receive a new grant of $100,000 from the Open Society Foundations to support efforts to meet the needs of new Afghan arrivals who want to settle in Erie.

“In the spirit of welcoming all immigrants and refugees, I am pleased to announce that the City of Erie will receive a new grant of $100,000 from the Open Society Foundation. These funds will support our efforts to welcome Afghan arrivals to Erie. It is our wonderful diversity that we treasure deeply and are constantly trying to grow,” said Mayor Joe Schember.

Open Society Foundations is of course the flagship “philanthropy” of nation-destroying globalist progressive billionaire George Soros. And Erie mayor Schember is a retired PNC bank vice president. He worked for PNC, the seventh-largest bank in America by assets, for 40 years.

“There are currently an estimated 65,000 Afghan new arrivals who will resettle in host communities across the country over the coming months,” Erie News Now noted. Team Soros was ecstatic with the mayor’s eagerness to help welcome thousands of them to town, emphasizing that it loves partnering with “local government leaders”:

“Local government leaders are playing a critical role in welcoming Afghans and helping them to settle into new communities,” said Laleh Ispahani, Co-Director, Open Society-U.S. “We are proud to stand shoulder to shoulder with them in welcoming these newcomers. In making this grant and others like it, we recognize that partnerships between local government and community groups are essential in building inclusive communities, and contributing to a growing welcoming movement across the country.”

Schember has long made the absorption of foreigners into Erie a signature agenda of his administration. YourErie.com reported in June, 2019:

Mayor Joe Schember has declared this month World Refugee Awareness Month in Erie and as a way to honor that, he has introduced a new council.

According to the mayor, the [N]ew American Council will look to help everyone feel welcomed and important in the city.

Over 20 people will make up the diverse group.

Throughout the last five years, people from 75 different countries have become Americans in Erie. One member from the new council, Walaa Ahmad, says she hopes that through this, she can help others who are following her path.

Schember’s “New American Council” is listed under a “Welcoming Erie” page on the official city website. That page declares:

Erie is proud to be a member of Welcoming America, a network organization that helps Erie unleash the power of New Americans, create a stronger community, and gain economic advantage. Erie is in the process of becoming a Certified Welcoming city – the highest designation reserved for cities and counties that meet rigorous requirements defining what it means to be a welcoming community.

Welcoming America does not conceal its intentions. It is openly trying to demographically transform this nation in what it sees as an enlightened new direction:

Diversity, equity, inclusion, and belonging are the fundamental elements of building welcoming societies for all. Welcoming America’s approach is rooted in an understanding that the factors impeding success for immigrants and non-immigrants alike are often rooted in a legacy of colonialism, structural racism, and interpersonal bias that must be overcome in order to achieve our vision of an inclusive society in which people can thrive.

Critics of the “Great Replacement” of America’s citizenry are often derided as feverish conspiracy theorists thoroughly doused in a spirit of racism. And yet Welcoming America flat-out declares:

Our purpose is to enable belonging for everyone, and explicitly immigrants. Our founding and focus since inception has been around the inflection point of demographic change and immigration, and the gaps that exist to understand and respond to xenophobia. We recognize that belonging is a shared human need, but can be expressed in ways that both hinder and advance a healthy multiracial democracy and successful organizational culture in which the rights and responsibilities of minority groups are not only protected, but deeply valued.

A bevy of partner cities from across the nation are listed in the organization’s “Network Directory.”

Since its first year of grantmaking in 1967, for example, Hewlett’s population program has continuously supported Planned Parenthood, the combative abortion-rights association and abortion provider. Hewlett granted nearly $100 million to Planned Parenthood between 2000 and 2016, and as of 2017, is the organization’s second largest private benefactor after the Susan Thompson Buffett Foundation.

The impact of this assault on Erie has been jarring. The Erie Times-News produced an astonishing piece of journalism in Sept. 2021 detailing and cheering on the exotic demographic transformation of the city:

Bhutanese refugees make up the largest group of refugees in the Erie community. In fact, four of the five largest groups of refugees to settle in Erie County in recent years share a common distinction: They all hail from an Asian country.

So it comes as no surprise to Dylanna Grasinger, executive director of the International Institute of Erie, that Erie’s Asian population more than doubled over the last decade, from 3,077 in 2010 to 6,380 last year, according to the 2020 U.S. Census.

The numbers say it all:

Erie County’s Asian population accounts for just 2.5% of its overall headcount. However, such a sizeable influx — some 3,303 people — is significant when you consider that Erie County lost some 9,690 people over the last decade, most notably in the city of Erie, where the population dropped 7%, or 6,955 people.

And even as its population dwindled, Erie County grew more racially and ethnically diverse over the last decade in large part because of its burgeoning Asian population.

In a Feb. 2020 interview with the Erie Reader, Schember revealed just how racially obsessed his administration can be:

So the 26 percent attainment for a minority workforce of all new, non-bargaining hires in the civilian workforce is based on Erie’s population, which is about 26 percent minorities. We are still going to always hire the best person for that position, but if we have two people that are comparable — one’s a minority, one’s white — we will hire the minority. And obviously, if the minority is the most qualified, they’re going to get hired.

This is what is happening on the ground in America while the citizenry is bombarded with endless propaganda messaging telling them that the Russian invasion of Ukraine is the most important issue in their lives today.