Educator warns American parents: ‘Other mother’ is sleeping around

In the age of “politically laden rainbow and transgender flags” and “grammar-butchering preferred pronouns” in our classrooms, loyalty to the alma mater, Americans’ “other mother,” has “become more important than the souls of our own children,” a former university president noted. 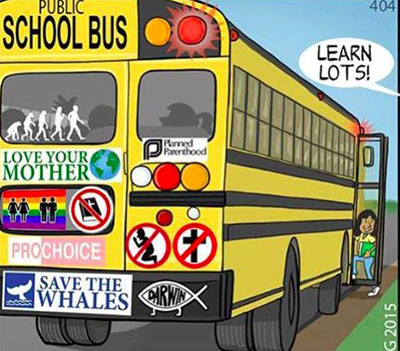 “Loyalty to a mom who’s known to be sleeping around with an endless menagerie of boorish ‘johns’ has become more important than giving our children a decent education,” Everett Piper, a columnist for The Washington Times and former president of Oklahoma Wesleyan University, wrote in an April 10 op-ed.

Piper cited the example of the high school in the Northeast Oklahoma district which flies the rainbow and transgender flags in its classrooms and teachers push preferred pronouns on students. “The school library for this ‘conservative community’ proudly promotes Toni Morrison’s ‘The Bluest Eye’, along with its full-page salacious description of a father raping his daughter.”

“If there is one thing I learned in my 35 years in the ivory tower, it is this: You can find fault in just about anything you want without fear of reprisal, but if you dare to point out that mom is sleeping around, all hell will break loose, and wrath of Khan will fall upon you,” Piper wrote.

“Critical theory, intersectionality, systemic guilt, racial conflict and the science-denying nihilism of progressive ontology are taught pervasively across the curriculum,” Piper added. “Parents report that their children avoid using the common restrooms in the local school because it is well known they could stumble across other students are ‘having sex’ in those bathrooms.”

The president of the district’s school board, Piper noted, “is on record endorsing a local politician who openly celebrates a ‘bi’ and ‘poly’ lifestyle and who champions the ‘moral good’ of a boy stealing a girl’s bathroom, shower and sport.”

Following last week’s school board elections, the superintendent of the Northeast Oklahoma school district “instructed his spokesperson to inform the Gideons that they can no longer offer free New Testaments to children in the local schools,” Piper wrote. “The Gideons, by the way, is an organization that has been distributing this nefarious book to our community’s students for over 50 years.”

Piper continued: “And for pointing all of this out, what is the response you get from the local educational establishment and its defenders? Cries of ‘You’re attacking us! How dare you say such things about our mother?’ ”

Piper concluded: “Jesus once warned that it is better for you to have a millstone tied around your neck and be cast into the sea than to lead one of his little ones astray. You might want to start investing in millstones. There’s about to be a run on the market.”

Educator warns American parents: ‘Other mother’ is sleeping around added by Editor Two on April 11, 2022
View all posts by Editor Two →