A peer-reviewed study of six battleground states in the 2020 election found 255,000 “excess votes” for Joe Biden and likely many more.

The excess votes found in the study by economist John Lott Jr. for the journal Public Choice may challenge Biden’s reported margin of victory in Arizona, Georgia, Michigan, Nevada, Pennsylvania, and Wisconsin. 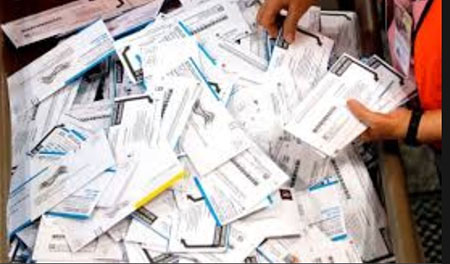 In a March 28 op-ed for RealClearPolitics, Lott noted that “Biden only carried these states — Arizona, Georgia, Michigan, Nevada, Pennsylvania, and Wisconsin — by a total of 313,253 votes. Excluding Michigan, the gap was 159,065.”

First, Lott said, he compared precincts in a county with alleged fraud to adjacent, similar precincts in neighboring counties with no fraud allegations. Precincts tend to be small, homogeneous areas, and many consist of fewer than a thousand registered voters. When comparing President Trump’s absentee ballot vote shares among these adjacent precincts, Lott said he accounted for differences in Trump’s in-person vote share and in registered voters’ demographics in both precincts.

“While precincts count in-person votes, central county offices are responsible for counting absentee or mail-in ballots. A county with systemic fraud may count absentee or mail-in ballots differently from a neighboring county. We can try to detect this fraud by comparing the results in bordering precincts that happen to fall on opposite sides of a county line. These precincts will tend to be virtually identical to each other – voters may simply be on the other side of the street from their precinct neighbors,” Lott noted.

In the 2016 election, “there was no unexplained gap in absentee ballot counts. But 2020 was a different story. Just in Fulton County, Georgia, my test yielded an unexplained 17,000 votes – 32% more than Biden’s margin over Trump in the entire state,” Lott noted. “With the focus on winning the state, there is no apparent reason why Democrats would get out the absentee ballot vote more in one precinct than in a neighboring precinct with similar political and demographic characteristics.”

Next, Lott said he applied the same method to provisional ballots in Allegheny County, Pennsylvania. Contrary to state law, voters were allegedly allowed to correct defects in absentee ballots by submitting provisional ballots on Election Day. Lott’s analysis found that such permissions in Allegheny County alone contributed to a statistically significant 6,700 additional votes for Biden – in a state decided by fewer than 81,000 votes.

Finally, “artificially large voter turnouts can also be a sign of vote fraud. This fraud could come in the form of filling out absentee ballots for people who didn’t vote, voting by ineligible people, or bribing people for their votes,” Lott wrote.

“Republican-leaning swing state counties had higher turnouts relative to the 2016 election. Democratic-leaning counties had lower turnouts, except for the Democratic counties with alleged vote fraud, which had very high turnouts.”

Lott said his estimates likely understate the true amount of fraud with absentee ballots, “as I didn’t attempt to ascertain possible in-person voting fraud. Allegations have arisen of many ineligible in-person voters in Georgia, Nevada, Pennsylvania, and Wisconsin. In Fulton County, Georgia, 2,423 voters were not listed as registered on the state’s records, and 2,560 felons voted even though they had not completed their sentences.”

Meanwhile, a new Rasmussen Reports survey found that, by a margin of 52% to 40%, voters believe that “cheating affected the outcome of the 2020 U.S. presidential election.”